“All of Tehran was outraged” by 300, writes Time correspondent Azadeh Moaveni. Not just its enormous financial success, she writes, but the fact that it was made at all since it’s being seen by locals as an attempt to drum up resentment and war lust for invading Tehran. 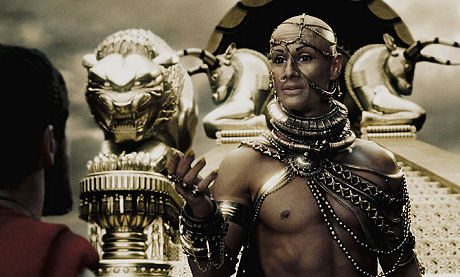 “Everywhere I went yesterday, the talk vibrated with indignation over the film 300 — a movie no one in Iran has seen but everyone seems to know about since it became a major box office surprise in the U.S.,” Moaveni reports. “As I stood in line for a full hour to buy ajeel, a mixture of dried fruits and nuts traditional to the start of Persian new year festivities, I felt the entire queue, composed of housewives with pet dogs, teenagers, and clerks from a nearby ministry, shake with fury [about it].

“I hadn’t even heard of the film until that morning when a screed about it came on the radio, so I was able to nod darkly with the rest of the shoppers, savoring a moment of public accord so rare in Tehran. Everywhere else I went, from the dentist to the flower shop, Iranians buzzed with resentment at the film’s depictions of Persians, adamant that the movie was secretly funded by the U.S. government to prepare Americans for going to war against Iran.

“Otherwise why now, if not to turn their people against us?” demanded an elderly lady buying tuberoses. “Yes, truly it is a grave offense,” I said, shaking my own bunch of irises.

“I returned home to discover my family in a similar state of pique. My sister-in-law sat behind her laptop, sending off an e-mail petition against the film to half of Tehran, while my husband leafed through a book on the Achaemenid Empire, noting that Herodotus had estimated the Persian army at 120,000 men, not one million as the film claimed. The morning newspaper lay on the table with the headline “300 AGAINST 70 MILLION!” (the population of the country). It was echoed by the evening news: “Hollywood has opened a new front in the war against Iran.”

“The timing of the computer-generated film, which depicts the ancient confrontation of Sparta and the Persian empire at the Battle of Thermopylae, is certainly inauspicious. It falls on the eve of Norouz, Persian new year, a time when Iranians typically gather in proud celebration, observing rites that date back over 3,000 years, way before Islam, to the age of Zoroastrianism, when their ancient land produced the world’s first monotheistic religion.

“t is not a particularly welcome season to be portrayed as pillaging, deranged savages. Since the entire country will be on two weeks of official holiday, there will be no shortage of time to sit about discussing the slight and what it portends for Iran’s current confrontation with the United States. For a people prone to conspiracy logic, the box-office success of 300, compared with the relative flop of Alexander (another spurious period epic dealing with Persians) is cause for considerable alarm, signaling ominous U.S. intentions.

“Top officials and parliament have scorned the film as though it were a matter of state, and for the first time in a long while, taxi drivers are shaking their fists in agreement when the state news comes on. Agreeing that 300 is egregious drivel is fairly easy. I’m relatively mellow as Iranian nationalists go, and even I found myself applauding when the government spokesman described the film as fabrication and insult. Iranians view the Achaemenid empire as a particularly noble page in their history and cannot understand why it has been singled out for such shoddy cinematic treatment, as the populace here perceives it, with the Persians in rags and its Great King practically naked.

“The Achaemenid kings, who built their majestic capital at Persepolis, were exceptionally munificent for their time. They wrote the world’s earliest recorded human rights declaration, and were opposed to slavery. Cuneiform plates show that Persepolis was built by paid staff rather than slaves And any Iranian child who has visited Persepolis can tell you that its preserved reliefs depict court dress of velvet robes, and that if anyone was wearing rags around 500 B.C., it wasn’t the Persians.

“It is going to take an act of foolhardy courage to distribute that film in Iran. It will truly be 70 million against 300.”