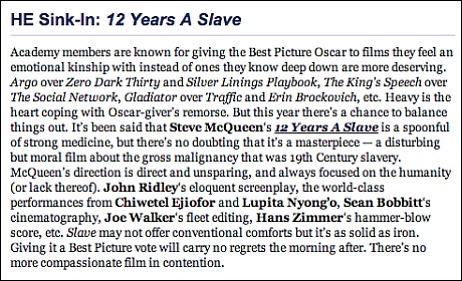 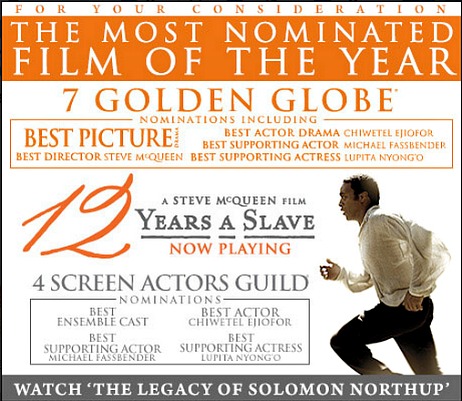 Here’s a link that goes with the above ad.

Academy members are known for giving the Best Picture Oscar to films they feel an emotional kinship with instead of ones they know deep down are more deserving. Argo over Zero Dark Thirty and Silver Linings Playbook, The King’s Speech over The Social Network, Gladiator over Traffic and Erin Brockovich, etc. Heavy is the heart coping with Oscar-giver’s remorse. But this year there’s a chance to balance things out.

It’s been said that Steve McQueen‘s 12 Years A Slave is a spoonful of strong medicine, but there’s no doubting that it’s a masterpiece — a disturbing but moral film about the gross malignancy that was 19th Century slavery. McQueen’s direction is direct and unsparing, and always focused on the humanity (or lack thereof). John Ridley‘s eloquent screenplay, the world-class performances from Chiwetel Ejiofor and Lupita Nyong’o, Sean Bobbitt‘s cinematography, Joe Walker‘s fleet editing, Hans Zimmer‘s hammer-blow score, etc. Slave may not offer conventional comforts but it’s as solid as iron. Giving it a Best Picture vote will carry no regrets the morning after. There’s no more compassionate film in contention.

To be sure, 12 Years A Slave depicts harsh institutional cruelty. Some have alleged that some aspects are rooted in uncertainty (given a reported belief that the original book by Solomon Northrup was perhaps a tad exaggerated); others have claimed that the day-to-day reality of slave treatment in the South was far worse than what McQueen’s film shows. What’s important, I feel, is that McQueen, Babbitt and Walker assembled 12 Years A Slave with immaculate control. In this sense it actually (you could say ironically) goes easy on its audience. Village Voice critic Stephanie Zacharek noted that Slave “stays more than a few safe steps away from anything so dangerous as raw feeling…even when it depicts inhuman cruelty, as it often does, it never compromises its aesthetic purity.” She meant that as a mild criticism — I think it’s a kind of compliment.

“When you think about Goya, who painted amazing, exquisite paintings [of] the most horrendous pictures of violence and torture and so forth,” McQueen told Rotten Tomatoes’ Luke Goodsell, “one of the reasons they’re such wonderful paintings is because what he’s saying is, ‘Look…look at this.’ So if you paint it badly or put it in the sort of wrong perspective, you draw more attention to what’s wrong with the image rather than looking at the image.”

There are seven great scenes in 12 Years A Slave. Paul Giamatti‘s slave auctioneer leading various buyers through a house where several naked slaves are waiting for inspection. That silent sex scene in which Ejiofor‘s Solomon Northrup and a slave woman couple wordlessly and instinctually in the dark, desperate to escape their lot if only for a few minutes. Chiwetel delivering beautiful payback to Paul Dano‘s plantation taskmaster, and then Chiwetel being forced to hang all day from a tree branch with a rope around his neck, his feet barely touching the ground enough to keep himself from strangling. Ejiofor running away and coming upon two slaves about be hanged for some infraction. Ejiofor being forced to whip Lupita Nyoong’o‘s slave character. Ejiofor appealing to Brad Pitt‘s Canadian abolitionist to deliver a letter. Ejiofor finally reuniting with his family at the end.

If there was a God, 12 Years A Slave and The Wolf of Wall Street would be the big neck-and-neck competitors for the Best Picture Oscar with everyone except for the harumphs going “yes, of course…are you kidding?” Closely followed by Joel and Ethan Coen‘s Inside Llewyn Davis, Jean Marc Vallee‘s Dallas Buyer’s Club and Spike Jonze‘s Her. Alas, we live in a Godless and narcotized realm.

Wolf and Slave couldn’t be more different in their tones, stylings and basic attitudes, but both are appalling, at times incredible-seeming portraits of malignancies eating away at the social fabric of this country. They both say “can you believe that determined, willful people got so caught up in their economic conumdrums that this kind of cruelty, insensitivity and debauchery not only happened but became absolutely common?” No other films have even attempted to deliver a Moral Tale with the mixture of artistry and blunt impact of these two, and yet…I just don’t get it, I suppose. But then again I do.