Well, that tip I got the other night about Andrey Zvagintsev‘s Leviathan turned out to be correct. It’s a drop-dead brilliant, awesomely-composed-in-every-respect melodrama and moral tale that concurrently serves as a microcosm of (or metaphor for) a morally compromised, ruthlessly malevolent, bare-knuckled Russia. Vladimir Putin will love it! (Kidding.) Political corruption, lust and infidelity, way too much vodka, blackmail and thuggery, gunshots, bromide-dispensing priests who kowtow to powerful scumbags, huge whale skeletons, crashing waves, rotting ships — this puppy has it all plus the aura of a majesterial art film plus opening and closing musical passages by Phillip Glass plus the most beautifully lighted, handsomely composed widescreen photography (by Mikhail Krichman) I’ve seen in a long time. And of course, Zvyagintsev, 50, best known for The Return (’03) and Elena (’11), is the grand maestro extraordinaire. And the acting — Elena Lyadova, Vladimir Vdovichenkov, Dmitri Seleznev, Aleksey Serebryakov, Anna Ukolova — isn’t “acting” but rooted, rock-solid behavior that kicks ass all the way around the block and back to your driveway. The consensus inside the Salle Debussy lobby among a few select critics was that Leviathan, a home run if I’ve ever seen one, is a very likely candidate to win the Palme d’Or. It just delivers on all fronts to such an impressive degree…I don’t see how the jury can deny it. 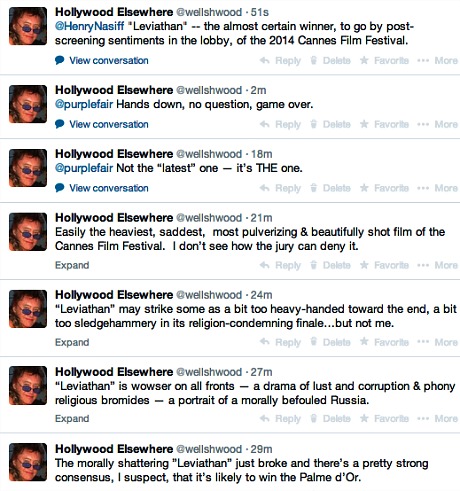 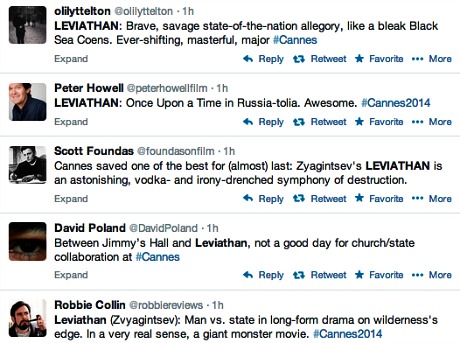