The upcoming Criterion Bluray of Michelangelo Antonioni‘s L’Eclisse (6.10) has me wondering why it’s so hard to find detailed information about the romantic relationship between Antonioni and Monica Vitti, who were quite the seismic historical couple. He made her into “Monica Vitti” and she made his movies sexy, moody and cool (if you regarded feeling nothing as “cool”). For a four- or five-year span (’59 to ’64 or thereabouts) they had a huge impact on world cinema and filmmakers everywhere. Vitti had starring roles in Antonioni’s four huge landmark films of that period, each sharing a common mood/theme about existential ennui and spiritual enervation among Italy’s jaded elite — L’Avventura (’60), La Notte (’61), L’Eclisse (’62), Red Desert (’64). What was the exact nature of their affair? Exactly how long were they together? The books about Antonioni are mostly critical appreciations of his art, but accompanied by somewhat sketchy or under-detailed accounts of his personal life. Was the Antonioni-Vitti relationship more or less the same kind of quid pro quo arrangement that has existed between many middle-aged, brand-name directors and younger talented actresses (you mold me into a classy, highly respected, world-famous star by casting me in your super-brilliant films and I will reciprocate in the usual ways) or was it something more? Vitti reportedly helped Antonioni raise production funds for L’Avventura. Were there shades of a Jules Dassin-Melina Mercouri partnership for a time…or not? I ask because Antonioni-Vitti were apparently “together” for the same five or six-year period that their creative relationship lasted. I don’t know the particulars but I’d like to. I only know that you can’t find much online about their history. If there’s a tell-all book of some kind I can’t find it on Amazon. If there’s a source I should be looking at, please advise. People have written about the career-propelled marriage between David O. Selznick and Jennifer Jones — why not Antonioni-Vitti? 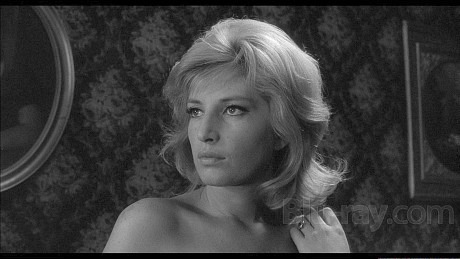