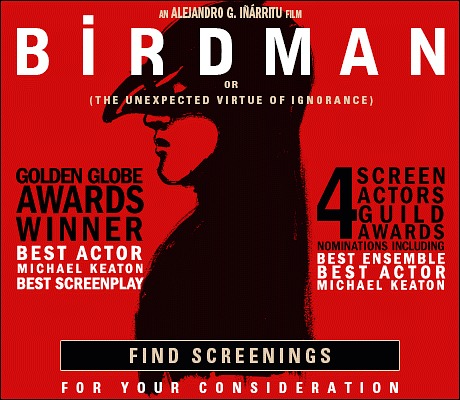 “I don’t think I changed the subject,” Inarritu told Ryzik. “I think I changed the way I deal with it. I learned that I can be very dark but have a very sharp sense of humor, too. I think being an intelligent creature is to have two ideas at the same time — you can have happiness and depression simultaneously. I think that’s what really [Michael Keaton‘s character] is battling. It’s the duality we all have.”

When I spoke with Inarritu five weeks ago he called Birdman “an unhappy comedy”, and yet, indications to the contrary, he’s one of the kindest, smartest, most alert, good-humored and thoughtful guys I know. My initial impression when I first met him, 13 and 1/2 years ago at a Hollywood party for Amores perros, was that he seemed delighted…enjoying the moment, his work, his life.

“There’s nothing downish in your personality,” I told him last month, “or not in public at least, so why did it take four films for you to crack out a comedy?” Inarritu basically said that the mirth is a front. “You know me and what I can be…I can be extremely dark and down…I have a complex, multi-dimensional personality that I embrace…I have to navigate through that and I don’t quit, I don’t surrender, but there’s an underlying negative [that] I’m fighting all the time.”

But I’ll never think of Alejandro in this light. We all have auras of different shadings. We all radiate different energies and nobody is entirely free of the black dog, but some of us, perhaps especially those who are not The Most Happy Fellas, have a special ebullience…a quality that seems to lift the mood of the room. But that bounce can’t be a complete act. At least some of it has to come from a genuine place.

Before Inarritu was honored at the gala for the recent Palm Springs Film Festival, they showed a video clip of him leading the cast and crew of Birdman in a kind of prayer on the first day of shooting. It involved the throwing of rose petals and shouting “Abba, Eli,” which is basically a chant of praise to God and fate and whatever luck can be found.

“Since Amores Perros and in every film since then, I have led a ceremony on the first day of shooting,” Inarritu explained a day after the Palm Springs event. “We all make a circle holding hands and keep silence for some minutes to meditate, pray or just be present and aware of the energy we all conform. I give a red rose…the blood color meaning effort and passion…to each member of the crew and after the silence, we take off the petals and throw them to the air as we say out loud ‘Abba, Eli!’ These old words have different meanings in Hebrew and Aramaic, but they are basically about an access to wisdom or a wish, a recognition of a higher power in control.

“My grandmother Mama tita, or Mom of my Dad, used to put me in bed with these words and every morning. So I am just following her instructions. I do the same at the end of the shooting but with white roses, white being a color of peace.”

So let’s leave it that, shall we? Our grandmothers and grandfathers knew a thing or two, and we would be wise to remember that. Just as those of us who are fortunate enough to have learned how to look beyond our petty grievances and disappointments and into the past and the eternal…those people also have something to teach. Let’s look to that and to crazy movies like Birdman, which are complex and complicated but which make us laugh and feel alive and grateful for our existence, however difficult it may seem on a moment-to-moment basis. It’s a great weight-of-the-world film about creative struggle and about trying to keep it together on all the other fronts. It has heart and hilarity and a little snarl at times. Like its creator.

All hail the great Richard Linklater but Alejandro, man…high-wire Alejandro with the ghosts of Wilder and Nichols looking on like Yoda and Obi-Wan Kenobi, and offering a little wave.

January 13, 2015by Jeffrey Wells7 Comments
« Previous post
Don’t Kid Yourself
Next post »
The More You Hear, The More Award-Worthy It Is