Paying Through The Nose

Whatever the truth of it, Johnny Depp was trashed in social media circles last weekend for having allegedly thrown a cell-phone fastball at wife Amber Heard and given her a facial bruise. Heard has obtained a restraining order over this alleged altercation as well as claims that Depp has “been violent towards her on multiple occasions during their 15-month marriage.” 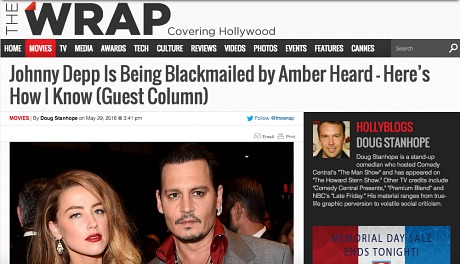 Depp’s ex-wife Vanessa Paradis (who just did time as a Cannes Film Festival juror) has chimed in as a positive character witness, saying she finds Heard’s assertions dubious or appalling or something along those lines. And yesterday TheWrap guest blogger Doug Stanhope posted a piece saying that Heard’s assertions are “bullshit” and part of a deliberate shakedown attempt to get as much money out of Depp as possible. (Depp and Heard hadn’t signed a prenup before marrying.)

I know nothing specific but I’ve heard that Depp likes to bend the elbow so maybe something happened. I know for sure that when a super-rich, over-50 guy marries a hot actress who’s 25 years younger, he’s definitely asking for trouble. He’s basically saying “I know this almost certainly won’t last very long — I’m not an idiot — but she’s beautiful and the sex is great and I’ll be dead in 35 or 40 years so what the hell.” (The gossip, says a friend, “was that Heard was a banshee in bed, bringing in other girls for threesomes”). And now that chicken has come home.

I think The Movie Godz may have put in a call to the Fate Godz and suggested that Depp needs to pay a little penance for all those Pirates of the Caribbean movies. That may sound fickle or loony to some, but I’m a serious believer in the idea that if you deliberately make a movie that you know will make piles of money but which you also know will be hell to sit through for people like myself, then you have to accept that the forces of karma will somehow push back and bring grief into your life.