This is going to sound odd, but Universal Pictures and Double Feature partners Michael Shamberg and Stacy Sher are planning on dramatizing the wrong 9/11 story. 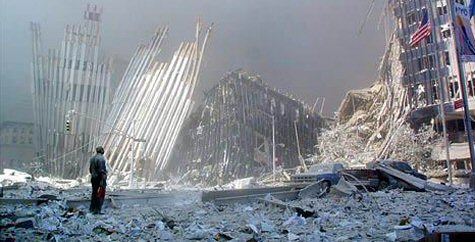 I don’t mean it that way, exactly. How could “wrong” apply to a true-life story about surviving the World Trade Center disaster? But Shamberg and Sher are focusing on a generic rescue saga instead of (and this only a portion of it) a mind-bending divine intervention story that happened only a few dozen yards away from the subjects of their movie, and at precisely the same time.
The Shamberg-Sher story is about a couple of Port Authority police officers named Will Jimeno and John McLoughlin, who found themselves buried inside a small pit under 20 feet of rubble after the collapse of the North Tower, and were eventually found and dug out. They were the last two victims to be pulled alive from the rubble.
But as Jimeno and McLoughlin struggled to be heard and rescued, there was another Port Authority employee named Pasquale Buzzelli who was lying unconscious on a large piece of concrete 30 or 40 feet above them. And his story — what he was doing before the collapse of the North Tower, how he happened to survive it despite being on or near the 22nd floor, how he dealt with the aftermath — has all kinds of haunts and echoes.
< ?php include ('/home/hollyw9/public_html/wired'); ?>
Thank fortune Jimeno and McLoughlin survived, but dramatically speaking (and I realize that it sounds heartless to discuss a 9/11 story in terms of its audience- grabbing potential) theirs is a fairly standard scenario. I’m not trying to minimize or in any way dismiss the horror of what it was, but in movie terms it’s familiar.
Does anyone remember Dorothy Malone’s character being pinned under collapsed metal beams in 1960’s The Last Voyage, and finally getting carried out by husband Robert Stack and ship worker Woody Strode? Or the mineworker pinned under beams (and exploited by reporter Kirk Douglas) in 1951’s Ace in the Hole?
And how many times have we seen televised rescue dramas on local news shows about a kid who’s fallen into a well or sinkhole, etc.? 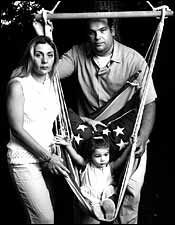 Louise and Pasquale Buzzelli, with their daughter Hope, in a photo that ran in New York magazine about 18 months ago.

Of course, the backdrop and circumstance of Jimeno and McLoughlin’s rescue will pack a wallop. But once you get past the 9/11 nightmare vibe (i.e., if you can step back and look at the story dispassionately), the story has a rote feeling.
Presumably Shamberg-Sher pounced on this because Jimeno and McLoughlin were the last people to be rescued from Ground Zero. Maybe someone can tell me what’s interesting about being the last. I mean, as opposed to being the first or the second-to-last or one of the guys in the middle group. Maybe it’s me.
The Shamberg-Sher project has no start date, but it has a completed script by Andrea Berloff. The project was brought to Shamberg-Sher by producer Debra Hill, who died from cancer less than two weeks ago.
Shamberg or Sher didn’t pick up, but according to critic and film historian Stephen Farber, who referred to this Universal-based project in a New York Times story that ran last Sunday (on 3.13), Universal is “happy” with the script. Farber passed along a sourced expectation that shooting will “hopefully start in the fall.”
There’s also a Columbia 9/11 project in the works, based on a recently acquired book by New York Times reporters Jim Dwyer and Kevin Flynn called “102 Minutes.” It’s basically about the chaos and mistakes in judgment that resulted in a lot of people needlessly dying inside the towers that day…people who might have gotten out if it weren’t for various dumb rules and bad calls. 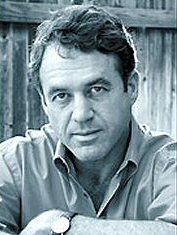 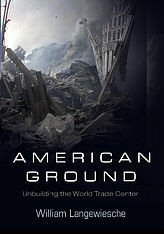 American Ground author William Langeweische; one of the versions of the cover.

The Columbia film was reported about in a 2.1.05 Variety article by Mike Fleming and Nicole Laporte. (The link is impossible.) It will be produced by Mike DeLuca, Rachel Horovitz and Michael Jackson.
Variety has also reported that Imagine honcho Brian Grazer has a deal with NBC Universal TV for an eight-hour miniseries based on the 585-page 9/11 Commission Report.
But it’s looking like the Jimeno-McLoughlin story could be the opener — Hollywood’s first 9.11 dramatization/recreation to hit screens nationwide. And given what it is (or appears to be), I find this disappointing.
That’s because it doesn’t have anything like the surreal, full-throttle, hand-of-God quality of what happened to Buzzelli, who somehow wasn’t crushed or otherwise killed when the North Tower collapsed, but instead landed on a concrete slab 180 feet below and was later found and carried off by rescuers.
Remember that urban myth that went around just after 9/11 about some guy (a fireman, the rumors said) who had somehow surfed the collapse of one of the buildings from one of the highest floors and miraculously made it to the ground alive? 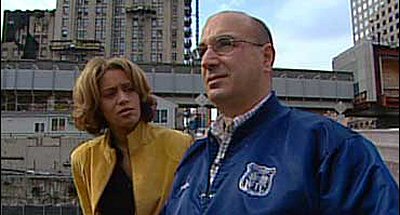 Snopes.com, a smart urban-myth-debunker site, discusses the “building surfer” myth as follows: “Because this is a rumor of man triumphing over mayhem, lore remakes one of the cherished but doomed heroes of [9/11] into a survivor, changing his real fate into one that not only spares his life, but leaves him triumphant in the face of utter devastation. Our sense of justice is thus appeased.
“He’s a figment of our wishful imaginations, a fictional icon of indomitability we are quick to turn to in times of disaster. In our minds, we see his ride as a giant thumbing-off to the destruction raining down about him.”
My point is, Buzzelli was almost this guy.
Buzzelli’s wife Louise, whom I spoke with briefly this morning, says her husband “landed on top of where [Jimeno and McLoughlin] were. They were in this void, this pit, and Pasquale actually landed right on top of them. The rescue workers found the other two first and told Pasquale, ‘Hang tight, we’ll be back to get you.’ They thought he was a rescue worker, and then one of them finally said, ‘Holy shit, this is a civilian.’ They had no idea.”
In September 2002 I excerpted an extremely well written Atlantic Monthly article that told Buzzelli’s story. The author was William Langeweische, in the second of two articles (called “The Rush to Recover”) about the disaster and its aftermath.
There are no online links, but all of Langeweische’s aftermath-of-9/11 reporting was published in a book called “American Ground: Unbuilding the World Trade Center.” 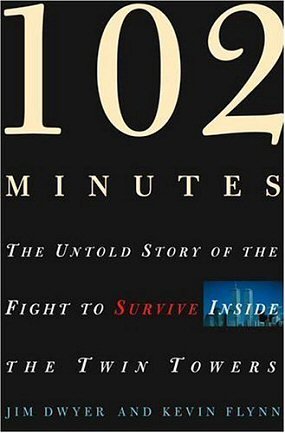 Here’s a transcript of Langeweische relating Buzzelli’s story for a PBS documentary about 9/11.
I love Pasquelli’s story because it says that God or fate or whatever can sometimes show random compassion and make senseless exceptions in allowing this or that person to duck out the back door. I love the sheer exhilarating illogic of a guy being in a huge collapsing building and falling that far and coming out of it with just a few broken bones and bruises.
On top of which Buzzelli went through a phase after his brush with death that was not unlike the emotional journey taken by Jeff Bridges’ character in the 1993 Peter Weir film, Fearless .
Instead of feeling elated over having survived, Buzzelli felt guilty and was plagued by nightmares. He wound up spending several months in a TV-watching, weight-gaining funk. His story was told in a September ’03 New York magazine piece (“The Miracle Survivors”) by Jim Fishman.
I think that Buzzelli’s surviving the North Tower collapse is on the level of that guy bursting out of the bathroom in Pulp Fiction and blasting away at point-blank range at Samuel L. Jackson and John Travolta…and neither one getting hit.
There were 16 survivors who were on the stairwell when the North Tower collapsed who made it out alive. Fishman doesn’t mention Jimeno and McLoughlin in the piece, but it would be surprising if they didn’t experience some psychologically tough patches of their own. Maybe their experience with this will be woven into the Shamberg-Sher film…or not.
I just know I’d much rather see the Buzzelli story on a movie screen. There’s that hand-of-God element, and the second act out of Fearless…and I can’t help but imagine how stunning it would be to see a recreation of what this poor guy went through. It would be (how could it not be?) an aural-visual mindblower. 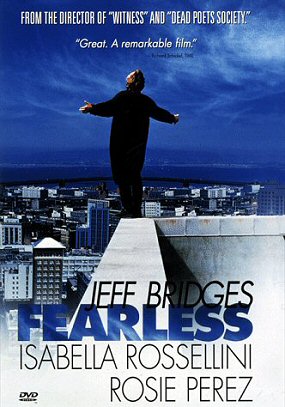 Here’s how Langeweische described it:
“Buzzelli had just passed the 22nd floor when the North Tower gave way. It was 10:28 in the morning, an hour and 42 minutes after the attack. Buzzelli felt the building rumble, and immediately afterward heard a tremendous pounding coming at him from above, as the upper floors pancaked. Buzzelli’s memory of it afterwards was distinct. The pounding was rhythmic, and it intensified fast, as if a monstrous boulder were bounding down the stairwell toward his head.
“He reacted viscerally by diving halfway down a flight of stairs, and curling into a corner of a landing. He knew the building was failing. Buzzelli was a Catholic. He closed his eyes and prayed for his wife and unborn child. He prayed for a quick death.
“Because his eyes were closed, he felt rather than saw the walls crack open around him. For an instant the walls folded onto his head and arms, and he felt pressure, but then the structure disintegrated beneath him, and he thought, ‘I’m going,’ and began to fall. He kept his eyes closed. He felt the weightlessness of acceleration. The sensation reminded him of thrill rides he had enjoyed at Great Adventure, in New Jersey. He did not enjoy it now, but did not actively dislike it either. He did not actively do anything at all.
“He felt the wind on his face, and a sandblasting effect as he tumbled through the clouds of debris. He saw four flashes of light from small blows to the head, and then another really bright flash when he landed. Right after that he opened his eyes, and it was three hours later.
“He sat up. He saw blue sky and a world of shattered steel and concrete. He had landed on a slab like a sacrificial altar, perched high among mountains of ruin.

“There was a drop of fifteen feet to the debris below him. He saw heavy smoke in the air. Above his head rose a lovely skeletal wall, a lacy gothic thing that looked as if it would topple at any moment. He remembered his fall exactly, and assumed therefore that he was dead.
“He waited to see if death would be as it is shown in the movies — if an angel would come by, or if he would float up and see himself from the outside. But then he started to cough and to feel pain in his leg, and he realized that he was alive.”
On the PBS documentary, Langeweische said at this point that Buzzelli was “lying on this altar. There’s no one around. It’s utterly silent. There’re no people around, nothing. It’s a wasteland desert in the middle of New York City. The buildings are gone, there’s smoke, and then there’s fire.
“At some point, he was quite certain — to make a long story short — that he was going to die from fire. So certain that he found a piece of jagged metal and was going to cut his wrists, in order not at least to burn to death. And he had gotten to that point when he was rescued.”