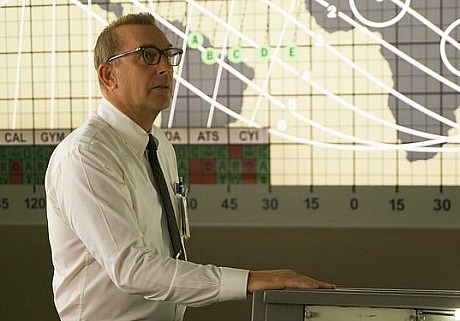 They all worked under NASA’s Space Task Group, which Harrison, in the realm of the film, is the big boss of. And good old Kevin, an office-worn, mild-mannered figure in glasses, white dress shirt and skinny tie, is the guy who gives Johnson/Henson a fair shake and a respectful salute as events move along.

There are some older actors who can just walk into a room without saying a word, and right away you relax. Because there’s something square and sensible about them. Costner is definitely one of those guys, and in every one of his Hidden Figures scenes, you know things will be more or less okay. Or that fairness will eventually come to pass.

The standout moment is when Harrison singlehandedly desegregates the white vs. colored bathroom system at the Space Task Group’s headquarters (which was located in Langley, Virginia) with a sledgehammer or crowbar or something in that realm.

Costner told me last month that he wasn’t especially pleased with how the Harrison character was written at first glance, but that he and Melfi hammered it out and re-shaped him with a bit more dimension and humanity. I for one can state that this effort not only gave Costner more to work with but enhanced the film as a whole.

I wrote a couple of years ago that Costner is the king of “no crapping around.” He’ll sometimes resort to those little charm-school games that all actors haul around in their kit bag, but the older he gets the less he goes there. And he’s not one of those guys who give the kind of “interesting” performances that Stanley Kubrick was always a fan of. Costner is always take-it-or-leave-it real which, in my mind, is always an “up” thing because the technique is more or less invisible.

** In my humble, less-than-all-knowing opinion the following BSA contenders give somewhat actorish performances — Jeff Bridges in Hell or High Water (Texas accent, slouchy-grouchy delivery), Dev Patel in Lion (nice guy sensitivity, actorishly unfulfilled, looking to connect with his roots), Michael Shannon in Nocturnal Animals (as a snarly lawman blithely but actorishly coping with cancer) and Silence‘s Issei Ogata (“acts” all over the place and very enjoyably at that). Not that there’s anything the least bit wrong with “acting” — I just happen to prefer the other kind.