A couple of hours ago I did about 13 minutes with Joel and Ethan Coen, the director-writers of the irrefutably brilliant A Serious Man, at Toronto’s Park Hyatt. 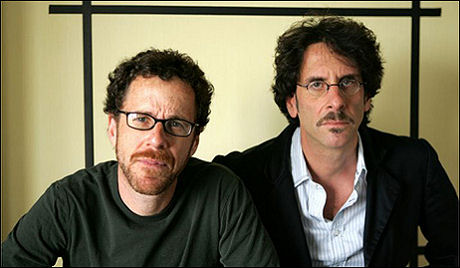 The talk was loose, amiable, amusing. It always is when you speak to them. As long as you talk their language, I mean. Their personalities are so low-key and unaggressive that they could both die from this, and that’s cool. I hate the word “genius” because Hollywood phonies use it all the time, but that’s what these guys have. And I really love it when they laugh.

The mp3 speaks for itself but I started by repeating a remark from a producer friend that the film’s dark view of life being a non- stop gauntlet of misfortune and cruel fate is “dishonest” given that the Coens’ lives are so creative and productive and successful. They guys didn’t really answer this one but the semi-biographical A Serious Man is about their teenaged years and the staunchly Jewish Minnesota community they grew up with, and not their filmmaking lives.

I complimented them about the beautiful CG tornado that appears at the end, adding my general opinion that invisible CG is the best. They agreed. The visual effects maestros were Oliver Arnold, Andy Burmeister and Alexandre Cancado of Luma Pictures.

I asked them if they agreed with my belief that the philosophy of A Serious Man can be summed up by that kiki joke I mentioned in my review. They weren’t sure what I meant so I went into the shpiel and Joel went, “Oh, you mean roo-roo?” The joke has been told with many names over the years. Not only did they not disagree with the analogy but got a good laugh from it.

The movie is basically saying, I said, that your friends can’t help you, your family can’t helpo and your community can’t help you when it comes to God’s cruel humor. You’re alone, basically, and there’s no real comfort to be had, but the film delivers this in such a quietly hilarious way. And that’s the art of it. Ethan said he’s completely comfortable with that assessment.

What’s the point of describing the conversation? Just give it a listen. I expressed hope that they’ll make another out-and-out comedy before too long, and Ethan said that their next, an adaptation of True Grit with Jeff Bridges in the Rooster Cogburn/John Wayne role, is fairly funny. Not overtly but…well, you know.