A director-writer hyphenate is telling me that the WGA membership is not 100% behind the WGA negotiators. His crowd would like to get back to work, he says, and would like to see Patrick Verrone & Co. be a little less Sonny Corleone and a little more Tom Hagen and approach this thing as a business deal that needs to be made. He says the dissenting writers would publically express this view but they’re keeping silent because they’d just get shouted down by the hard-liners. 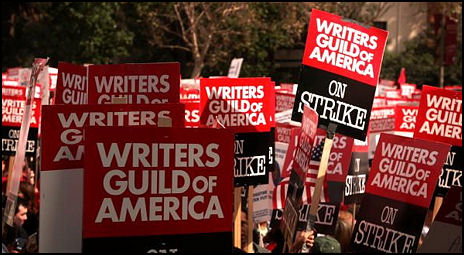 He’s also saying he wants the WGA to follow the lead of whatever deal the DGA comes up with, which he thinks will happen within a week or two.
“I write because I didn’t want to work with a shovel,” he says. “I write because I like to sleep in late. Because I love movies and wanted to do what I wanted to do in life. No one ever asked me to be a writer. It’s a cushy job. If I couldn’t make a living doing it, I’d get a real job or figure out something else out, but that’d be second choice.
“Do what the production staff, or IATSE guys do? No way, that’s hard work. If I couldn’t make a living I wouldn’t spend a whole lot of time whining about it though. I’d be glad for the time I got to be a writer, and if I really still loved it, I’d write short stories for myself and my friends. Or I’d rack my brains to come up with new ideas.
“Sorting this through in my head has led to me to a conclusion about what’s happening now with the strike, and I have to confess I’m not thinking as lockstep as some of you might want me and others to be, so get ready for a dose. I’ve also been influenced by watching The Godfather recently and considering the words of Robert Duvall‘s Tom Hagen, consigliere for the Corleone family, when he said to James Caan, “It’s business, Sonny…not personal.”
“A lot of the ‘writers’ need to get honest fast,” he says.
“No one ever asked us to be writers. This is a choice we made.
“All the talk about the ‘little guy’ that the WGA fights for is sad when you think how little most of the writers care about the ‘little guy’ who is out of work right now, along with the crew members and the office staff. 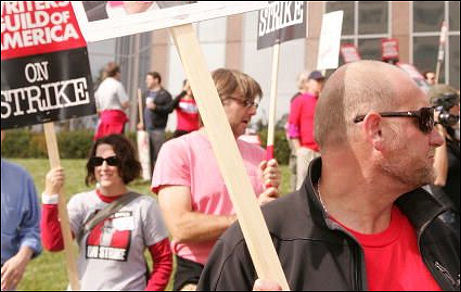 “This is a good two-way disagreement with true greed on both sides, but the ‘writers’ need to get real about our side of the landscape here.
“There’s a lot of talk about ‘creators’ and how ‘important’ writers are. Thing is, ‘creators’ are paid well. Really well. More than most studio execs in fact. Way more. Hired writers on shows are paid well too. Just not as well. That’s life, but the top dogs in our union are making sick money. Peter Chernin sick. Don’t think they aren’t. They have every right to (and it’s really the reason most of you are in the TV business).
“And we aren’t ‘forced’ to give away our copyrights, people. We sign the contracts willingly. Why? Because we want the money. We want to be in business with the people that are giving us the check. No one puts a gun to our head. You want to keep your copyright? Don’t take the check. I’ve taken the check and I’ve had to think about giving my ownership away and it hurts and when I couldn’t, I didn’t. You want the copyright? Figure out how to get it or write a novel. A play. This is a different medium and as writers sometimes we’re having a hard time accepting that.
“I appreciate what the union has done in the past. We should be proud. But the people who are hijacking it and whipping the town up right now shouldn’t be all that proud. They’re hurting a lot of innocent people in a very tough time for this town. It’s very selfish.
“Get back in there and negotiate for the internet but everything else is a powerplay. Animation? Reality? Let them strike on their own if they want to be in the union. It’s all so sad. Our people are like sheep, they get so whipped up. Do we really just want to be mad so we listen to these people? Why aren’t we just as mad at them? You really think the consensus is so unanimous? Wrong. Those of us who don’t agree with you don’t bother to go to meetings to get yelled down.
“I play poker with a guy in the WGA committee. A guy who hasn’t sold a script in a lot of years by the way. He calls it ‘war’. ‘We’re at war. It’s not ‘war’. It’s business. Figure out a way to make a damn deal. 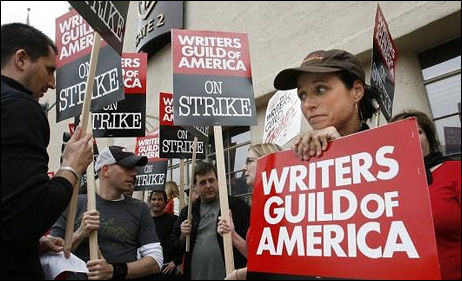 “You love to ride down the DGA and call them pushovers. IATSE, Tom Short are pushovers? Anyone that doesn’t see it your way is a ‘pushover’ or a ‘shill’.
“You know what the DGA did? They did their homework. That’s not a pushover. They want to make a deal that keeps their people working. Their concern isn’t the power of their union. It’s getting a good deal. It’s keeping working. Keeping our families fed. It’s business.
“Face the facts: when the strike is over staffs are going to be smaller, and there’s going to be less development. Less scripts purchased. We have not helped. In the long run, we have hurt. We have cost jobs and money. We have not and will not have gained in any way, and that is the only fact that matters.
“We need to get rid of the people doing the negotiating. Whether they’re good or bad, they couldn’t make a deal. Out. Move along. Get fresh faces in there, pare it down to what’s real, and then call the AMPTP in. The rest is just ego-fed power play. Trust me folks, this union head they hired is taking a check home every week of the strike.
“I’m not down for fighting ‘war’ when it’s really just business. There’s enough real war out there.
“There are pigs on both sides of the troft. The producers and studio people who don’t agree with the AMPTP hard-liners need to get into their faces and make them negotiate. (Are you listening Steven Spielberg, Brad Grey, Les Moonves?) But we need to get it together as well. This is not a battle between good and evil. It’s not black and white. You can kid yourself that it is, but it isn’t. They are not storm troopers and we are not the sweet-faced rebellion. Many of us are lazy, greedy, wrongheaded and power hungry. Just like the other side. I know the good-evil thing is more fun and easier to swallow, but it’s not true. It’s a common- sense business negotiation and nothing more. Both sides need to get that.
“The WGA and the loudest of the cattle-drivers don’t want a dissenting opinion. Yet it is a void that needs to be filled. They don’t want to break ranks. Talk is always of the fear of ‘breaking ranks.’ Why is that? Why are they so afraid of breaking ranks? Because they need to keep the group marching. If they slow it down, there may be time to listen to some common sense and realize that they’re mad, but not that mad… not go-to-war mad.”