A Failure of Nerve

For me, the problem with Knight and Day (20th Century Fox, opening today) isn’t that it’s absurd, excessive, preposterous — a largely incoherent, romper room Coyote-vs.-Roadrunner travelogue cartoon. The problem is that it doesn’t go far enough in this regard. 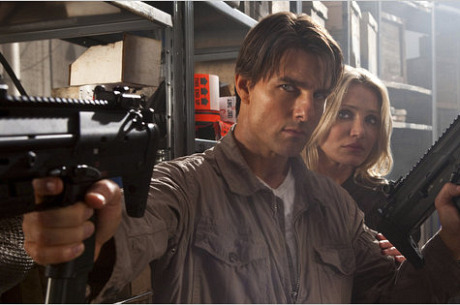 The Tom Cruise-Cameron Diaz film adheres to what has become a standard summer-movie formula — the anarchic, exotic-location bullshit action comedy with a soupcon of romance. The difference here is that director James Mangold and screenwriter Patrick O’Neill have (a) cranked up the craziness to a bolder, loonier level than anything seen before, and (b) thrown out most of the connective plot-and-plausibility tissue that other films in this realm make…well, at least some use of.

The problem is that Mangold and O’Neill have inserted strands of reality here and there — little touch-and-go acknowledgments that aspects of the actual world are part of the story. What they should have done, I feel, was throw the book out and jump off the proverbial cliff and really cut loose. You know, turn it into some kind of fuck-all action fantasia.

I’m just thinking out loud, but I’m imagining Cruise and Diaz and the various costars (including Dale Dye!) embracing the fanciful mindsets of escaped mental patients running nude down an English country road. A movie that pops the cork, gulps down the champagne and goes sailing over the waterfalls saying “nothing matters any more….we don’t care and neither should you!…we’re free, you’re free! We can turn into animals! We can spend the whole film driving souped-up stock cars in Utah! We can take over the White House. We can get jobs as bartenders in Cancun!”

And at the same time (illogical as this sounds) have it be, you know, about something. Like Theodore Flicker‘s The President’s Analyst. That 1967 James Coburn film was a silly, slip-shod satire in some respects, but it had a giddy, curiously liberating tone that ended with a shoot-out between the good guys and the phone company. It started out as a vaguely spooky comedy about a shrink having sessions with President Johnson, and ended up as an invasion-of-privacy thing — a Paul Revere rallying cry about the need for free men and women to fight the corporate goons trying to invade our lives. 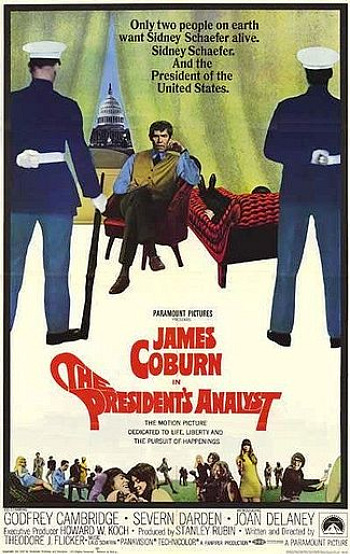 But of course, Mangold and O’Neill and their bosses at 20th Century Fox didn’t have the balls to venture into the wild blue. They felt obliged to protect the interests of Newscorp stockholders by keeping at least one foot on the ground, or one foot, rather, tromping down on an accelerator as Cruise roars down a freeway with five or six guys shooting at him with automatic weapons.

It’s all crap, really. The movie realm of 2010, I mean, in the sense that now more than ever, Big Budgets mean Iron-Clad Conventionality. The corporate rule book is always followed, always looming. Pinkberry: The Movie isn’t all that funny because it’s a fairly accurate reflection of what’s going on today.

Knight and Day kicks out every so often. I’ll give it that. It’s not hamburger but expensive, well-prepared marbled steak. It looks great most of the time. Every so often Cruise and Diaz have these little mood moments that kind of click into place. But it mostly feels like time — an eternity, in a sense — spent in the recreation yard of a large and lavishly outfitted minimum security penitentiary.

I love the closing line in A.O. Scott‘s N.Y. Times review. In an early scene Cruise says to Diaz, “Sometimes things happen for a reason.” Scott calls this “a statement — perhaps generally true — that applies to absolutely nothing about Knight and Day, including the making of the movie itself.”