A Hatful of Rain

Last night a friend attended a special American Cinematheque/Aero theatre presentation of two Don Murray films — The Hoodlum Priest (’61) and Bus Stop (’56). Murray, 81, sat for an interview between showings. This reminded me of Fred Zinneman‘s A Hatful of Rain (’57), a black-and-white CinemaScope drama in which Murray plays a heroin addict whose effort to hide this fact from his wife (Eva Marie Saint) convinces her he’s having an affair. 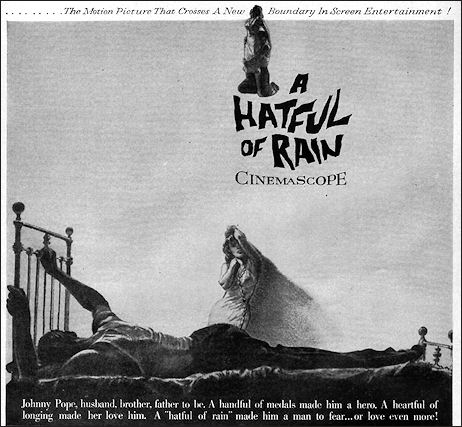 I’ve been a fool for monochrome 2.35 to 1 all my life, and would eventually love to see at least a handsome DVD of this. I love the intensity of the one-sheet — the writhing bodies and the implications of frustration and imprisonment.

If I’m not mistaken, A Hatful of Rain has a reputation of being a little too issue-driven — a little too taken with itself for having the courage to deal with drug addiction, and maybe a bit too emphatic in a straight-arrow, Playhouse 90-ish way.

I don’t know about that. I caught it once on TV in my teens, and recall a jolting, hard-knocks drama with tough, sharply written dialogue (taken from the play by Michael V. Gazzo, who later played Frankie Pantangelli in The Godfather, Part II, and adapted by Gazzo, Alfred Hayes and Carl Foreman) and ace-level acting. Anthony Franciosa, Lloyd Nolan and Henry Silva costarred.

Knowing this about Gazzo gives emphasis to his big scene in The Godather, Part II when he complains to Al Pacino about the Rossotto brothers, his New York crime rivals, being low-lifes who push whores and “junk…dope!” At this instant Gazzo yanks up his sleeve to emphasize disgust.

Foreman’s name didn’t appear on the credits due to his being blacklisted at the time; the WGA restored his name in 1998, 14 years after his death.

It would also be interesting to hear Bernard Herrmann‘s score.