A Hint of Portraiture

According to N.Y. Times reporter Michael Cieply, Arnold Schwarzenegger’s next film, Cry Macho, in which he’ll have his first starring role since setting aside his Hollywood career to become California’s Governor, contains echoes of his current Mexican maid paternity scandal. 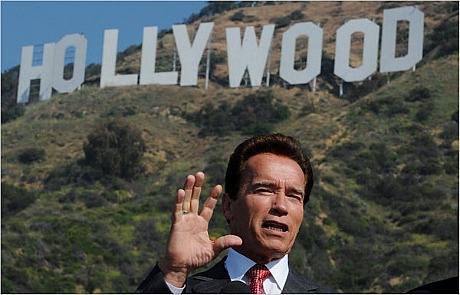 Boiled down, Cieply states, Schwarzenegger’s character will portray a man “working out a complicated relationship with an 11-year-old who unexpectedly turned up in his life,” and who “falls in love with a Mexican woman.”

Cry Macho “was written as a novel decades ago by the playwright N. Richard Nash, who died in December 2000 at 87,” Cieply writes. “It tells the story of Mike Milo, a washed-up horse trainer — he was a rodeo cowboy until Mr. Schwarzenegger entered the picture — who schemes to make $50,000 by snatching a streetwise Mexican boy from his mother in Mexico City and delivering him to his father, Milo’s ex-boss, in Texas.

“As Milo and the boy, Rafo, get to know each other, the plan changes. The boy actually wants to connect with his father, a ne’er-do-well who is trying to have him kidnapped for leverage in a business deal. Mr. Schwarzenegger’s character falls in love with a Mexican woman. A rooster named Macho provides comic relief.

“But mostly, Cry Macho is written as a morality tale about two characters who help each other through tough transitions.”