A Horse Is A Horse

In Secretariat (Disney, 10.8), Diane Lane gives an earnest, steady-as-she-goes performance as Penny Chenery Tweedy, the conservative housewife who risked financial ruin and defied her husband (Dylan Walsh) and brother (Dylan Baker), who wanted to sell their inherited horse farm for a quick profit, in order to nurture, train and place into competition one of the most celebrated racehorses in history.

The horse was initially named Big Red but eventually became Secretariat — legendary winner of the 1973 Triple Crown. And it’s a thrill to watch (and hear) him run. The film gives you that amazing charge with exceptional you-are-there photography and sound. But Secretariat is as rote and regimented and corny as Kansas in August, and I don’t see it selling many tickets beyond its base constituency — squares, tourists and hardcore horse-racing fans.

In short, I loved the story of Secretariat more than the movie. Actually, not the story so much as the horse-racing footage. The problem (and the movie has more than one) is that director Randall Wallace uses every trick in the book to make it seem touching, suspenseful, a cliffhanger…a story that massages your heart. Every. Trick. In. The. Book. And you’re not “in” the groove of Secretariat as much as fully aware of everything he’s trying to do to crank you up. You never forget you’re watching a Randall Wallace family-values movie for the schmoes — i.e., white people who stroll around in plaid shorts and white socks and La Crosse golf shirts, and who have an allegiance for old-fashioned Wonder Bread conservatism.

Everything is so right down the middle. And for me, Wallace’s directing style is too tight and straight-laced. There’s a little cut-loose dance sequence when Lane and her team are shown bopping and grooving to a ’70s soul tune, but Wallace doesn’t know how to cut and bump to this kind of thing, or at least not very well. Nor is he especially good at depicting early ’70s counter-culture kids and their behavior. It feels fake, “performed” — like some 1971 Methodist minister’s view of how hippie kids dressed and spoke and acted.

Lane has three moments that play exceptionally — (a) an argument/firing scene with a horse-farm manager in the first act, (b) a moment when she looks into the eyes of Secretariat to see if he’s ready to run, and (c) a financial face-off scene between she, Walsh and Baker. Except the latter scene is brought home by the housekeeper (Margo Martindale) when she spells out the specifics of their father’s will. A solid award-worthy performance needs three powerful moments, not two and a half. Lane’s performance wants to be as good as Sandra Bullock‘s in The Blind Side, but doesn’t quite get there. Sorry.

And Mike Rich‘s script doesn’t really give her any huge killer moments. Solid moments, but not great ones. The staring-at-Secretariat moment might be the best of all. Lane has a hold on the heart and spirit and determination that surely drove her character forward. Nice lady and mildly hot under the circumstances. But why did that wig she was wearing have to look so much like a wig? Don’t hairdressers know how to make wigs a little mussy and more natural-looking?

Walsh’s conservative hubby is a total drag to be around. Over and over he’s saying to Lane, “You’re supposed to be my wife and take care of me and the kids rather than go galavanting around the country with a race horse.” I was sitting there muttering, “Get a clue, you Republican asshole. Your wife is doing something really remarkable and ballsy. Be a real man and support her!” He comes around at the very end, but when it’s easy to come around (i.e., when Secretariat is winning races), and so it doesn’t mean as much. So he’s a washout and a putz.

And I really, really didn’t relate to the old-fashioned, come-back-to-Denver, family values element that Walsh (and the movie) is constantly bringing up or our consideration. I hate Republicans and all their creepy family-values hypocrisy.

I just wish that Rich’s dialogue wasn’t so cliched-sounding. I wish it had more of a poetic curve-ball quality. The writing feels like it comes out of the Reader’s Digest Words of Wisdom and Charity or something. It feels too pat, too Christian, too right down the middle. Time and again I was guessing the dialogue before a character would say it, and then he/she would say it!

John Malkovich gives a colorful and eccentric turn as Lucien Laurin, Secretariat’s trainer, but it’s kind of a rote role. He’s fine, but they don’t give him enough to do. Entourage‘s Kevin Connolly and some other guy play racetrack reporters whose sole function is to comment on the action like a Greek chorus, rotely and tediously. Nestor Sorrano plays the owner of Sham, Secretariat’s chief competitor in the last two Triple Crown races, by way of The Sopranos…boast and bluster, open-collared shirts, gimme a break. 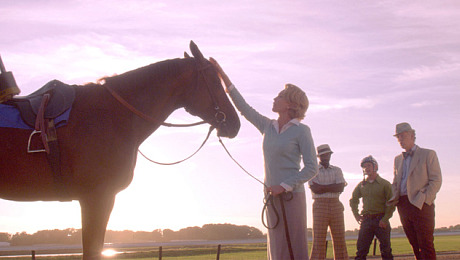 And what’s with using “O Happy Day” twice? Is there supposed to be some kind of spiritual God component in the story of Secretariat? That’s what the music seems to be implying…except it’s not there. The movie is about a straight-laced lady who stood by a beautiful horse that wound up winning big…and that’s it.

I loved the racing footage so much that I went right home and watched the original races on You Tube. I’ve watched the Belmont Stakes race four or five times since.

Bottom line: A so-so to mildly decent film with a great horse story, but not written well enough or directed by someone good enough to really lift it off the ground. And with a first-rate, very admirable Diane Lane performance with two and half strong moments but lacking those serious killer ones.