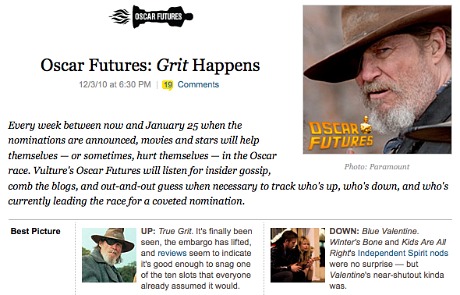 Brown Fallacy #1: “Matt Damon steals the movie.” Retort: Sorry, but he doesn’t. At all. He just acts in it. The one who steals the film is Dakin Matthews.

Brown Fallacy #2: Jeff Bridges is “allegedly better than he was in Crazy Heart, or better than John Wayne was in 1969’s original Grit.” Retort: Nope. Bridges just frowns and barks and growls his way through it, and there’s really nothing all that great about this, trust me.

Brown Fallacy #3: The Coen brothers are “‘at the top of their game’ or working outside of their usual idiom with nice results.” Retort: Nope. They chose a story that says nothing other than the fact that life was tough and brutal in the Old West, and which has nothing whatsoever to bequeath thematically about our own world. The Coens have made a holding pattern artistic-exercise film that ranks near the bottom of their list along with The Man Who Wasn’t There and The Ladykillers.

Brown Fallacy #4: True Grit reviews “seem to indicate it’s good enough to snag one of the ten slots that everyone already assumed it would.” Retort: Blatantly untrue due to the HitFix Drew McWeeny orgasm factor. The fact that McWeeny called True Grit “one of the most crowd-pleasing films I think the Coens have ever made, accessible and simple and mythic and beautiful” tells you without question that it’s probably an artistically curious thing that’s doomed to fail with Joe Popcorn. McWeeny is a brilliant fellow, but experience has taught me to never trust his love spasms. “Crowd-pleasing”? Maybe in spurts, but this film is going to die very quickly when it opens.