A nation of dumb beasts 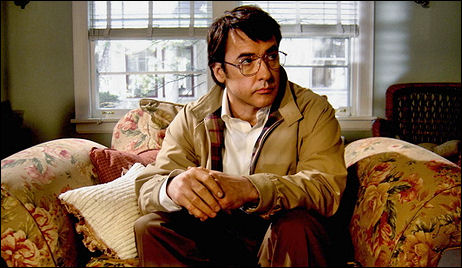 Cieply writes that “you can’t blame a potential customer who can’t see the difference between In the Valley of Elah from Warner Independent Pictures and Grace Is Gone from the Weinstein Company. Both are about dead Iraq veterans.” Correction: knuckle-draggers who haven’t yet mastered the art of going online and reading about upcoming films might be confused, but I don’t see how this would be a problem for others.

I don’t care that much about baseball, but if I wanted to know about a particular team or player, I could and would find out everything within a matter of four or five minutes, no prob. We’re talking minimal effort for anyone with a junior high school education.

Is Ciepley saying that the United States become a nation of dumb beasts, grazing on a sloping hillside and going “baaah”? Is it really that difficult to investigate the differences and similarities between the works of F. Scott Fitzgerald and Ernest Hemingway? Is it that much of a hassle to do a Google search on Grace is Gone and then go a Rotten Tomatoes or Metacritic search on In The Valley of Elah?