Manhattan HE Reader Ira Hozinsky has pointed out that David Denby‘s Starting Out in the Evening review, which I linked to yesterday, is actually the New Yorker‘s second review of this film in the 12.24 issue, as Richard Brody‘s withering capsule review confirms: 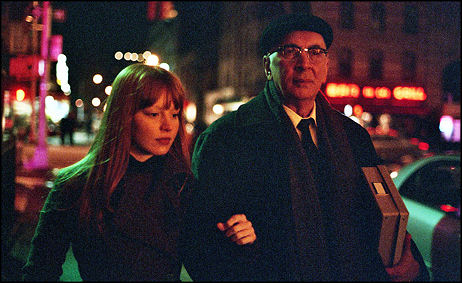 “As Leonard Schiller, an aging, ailing old-school novelist seemingly born in a suit and tie, Frank Langella gives his all in a hopeless cause. This soporific quasi-literary soap opera finds the writer, a lonely widower, clacking away at a novel on a manual typewriter in a prewar Upper West Side palace when Heather Wolfe (Lauren Ambrose, too perky by half), a grad student, turns up. She wants to write a critical biography of Schiller to rehabilitate his name and his work, and she worms her way into his confidence and, unsurprisingly, his bed, with predictably unhappy results.”
And so begins and ends the Starting Out in the Evening 2008 takedown campaign…a month late and a dollar short, perhaps, but there’s nothing gets those juices flowing like a surge of rebel opinion.
“There√É¬¢√¢‚Äö¬¨√¢‚Äû¬¢s also something about his unfulfilled daughter (Lili Taylor) and her relationship problems,” Brody continues, “but the story runs on Schiller√É¬¢√¢‚Äö¬¨√¢‚Äû¬¢s embattled rectitude and the fantasy that great writers embody a lost gentility of austere habits too sacred to be sullied by mere carnality. In real life, he would have eaten her up by the end of the first reel.”