I was looking forward to a great Jack Abramoff double-header at the 2010 Sundance Film Festival with George Hickenlooper‘s Casino Jack showing in the premiere or dramatic competition section alongside Alex Gibney‘s Casino Jack and the United States of Money, a 120-minute doc about the disgraced Republican wheeler-dealer. 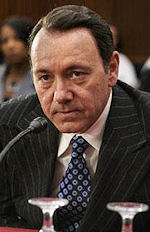 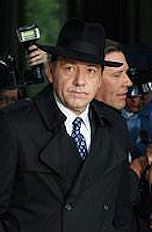 Alas, Hickenlooper didn’t want his film getting into a tit-for-tat game against Gibney’s so only the latter will in fact screen two weeks hence in Park City.

I for one feel Hickenlooper should have definitely brought his film to Sundance because of Kevin Spacey‘s lip-smacking performance as Abramoff, which delivers much better entertainment than the Real McCoy. (Or so I’ve decided after watching a couple of Abramoff clips.) I was rubbing my hands with glee at Spacey’s raging Republican blackhat when I caught a rough cut four months ago. This is the kind of role that Spacey was put on the earth to perform — an unrepentant madman with a serpent’s tongue flicking in and out of his mouth, like a bullfrog’s.

The summit of Spacey’s peformance is a mirror-in-a-bathroom moment that recalls Edward Norton’s classic “fuck you New York” rant in The 25th Hour. What Spacey does (and it’s right smack at the beginning of the film) is give us his rationale for being a swaggering Republican pig — and it’s brilliant! Life is brutal, homie. You have to get what you can any way you can, and fuck those candy-asses who wave the rule book around. I will do what I can to provide for my family, and pity those poor saps who don’t understand the game.

I mean, I almost wanted to abandon my leftwing pinko political beliefs after hearing it. Well, not really but almost. I hate righty greedheads but I kinda like them at the same time. Spacey’s Abramoff reminded me why I feel this way. Because they’re honest about who and what they are, I suppose.

Another good thing about showing at Sundance 2010 is that audiences there would get Casino Jack in the right way. You don’t have to be highly educated to have fun with it, but being at least vaguely familiar with Bush-era shenanigans in the nation’s capitol from ’01 to ’09 (which includes the offenses of Jack Abramoff) can’t hurt, and one thing that’s really great about Sundance filmgoers, apart from the fact that many of them seem literate and semi-educated, is their enthusiasm for films with adult brainy scripts.

I for one feel that Casino Jack is a kind of popcorn film because it “really stinks” in a Damon Runyonesque sense. I’m thinking particularly of Paul Newman‘s line in The Sting when he’s talking about how the O’Shea mob paid off the cops and the feds in 1920s Chicago, and how “it really stunk, kid,” which he says with a grin. Either you enjoy this stuff or you don’t.