Hollywood and Fine‘s Marshall Fine is calling Jonathan Parker‘s (Untitled) “a laugh-out-loud satire with a dry-martini wit [that] manages the neat trick of poking wicked fun at the worlds of experimental music and art — from all angles — even as it gives a humorously sympathetic look at the plight of the serious artist working far outside the commercial mainstream. 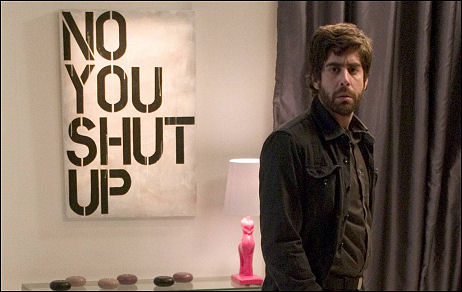 “His name is Adrian Jacobs (Adam Goldberg) and he’s an experimental composer in New York, whose brother, Josh (Eion Bailey), is a successful painter. But both men have artistic frustrations.

“Adrian works in the realm of atonal music, using sounds like shrieks, squeaks, tearing paper and a chain being dropped into a metal bucket in his compositions. His concerts are ill-attended — with even fewer people sitting through the whole thing. His music earns laughter as often as it wins applause.

“Josh, meanwhile, earns big paychecks painting large, innocuously amorphous swatches of color that are sold by art dealer Madeleine Gray (Marley Shelton) to hotel chains and hospitals as decoration. Josh begs her for a show at her trendy gallery, saying his goal is to be a great artist.

“‘That’s not a goal — it’s a gift,’ she tells him, coating harsh words with sweet tones. And it’s a gift he doesn’t possess.

“Adrian falls for Madeleine but finds himself appalled at what passes for art in her Chelsea gallery. She sells Josh’s paintings out of the back room for wads of cash to keep her gallery afloat — but devotes her display space to outre efforts by of-the-moment emerging artists whose work is as much about the theory as the execution. Madeleine doesn’t blink when someone refers to Josh’s work as merchandise — but explodes at Adrian when he refers to her gallery as ‘your store.’

“It’s that dichotomy between creativity and commerce, between art and product, that Parker nails again and again in smart witty ways. Yet even the people he pokes fun at are treated affectionately — like the clueless collector (Zak Orth), who is unfamiliar with Matisse (‘I’m only interested in art of my time’) and is using art to diversify his investment portfolio: ‘Art doesn’t look as good when its value goes down,’ he notes at one point.

“No one is spared the needle of the script Parker cowrote with Catherine di Napoli. Adrian is a sympathetic figure, a seeker struggling to take his own work seriously in a world that treats him as a joke.

“At one point, he sees his future when he attends a concert by his idol, an elderly experimental composer — and listens to self-appointed critics ask this legend the same kind of stupid questions they routinely ask Adrian. Yet even Adrian is given to pompous pronouncements like, ‘Harmony is a commercial plot to sell pianos.’

“The script finds all the humor it can in art-world pretension — but also recognizes where the comedy lies in the raging insecurity, frustration and self-doubt of these characters.

“Goldberg is particularly good at making Adrian funny — not because he’s a fool but because he’s not. Shelton brings a calculating sexiness to the role of Madeleine, while Orth, as the collector, and Vinnie Jones, as a preeningly overconfident artist (whose work incorporates hilarious pieces of taxidermy) steal all the scenes they’re in.

“Intelligent and provocative, (Untitled) is consistently surprising and funny without pandering for laughs.”