Yesterday morning (or early last evening in Cannes) a Ramin Setoodeh-authored Variety interview with Cate Blanchett came online, and the immediate takeaway was that Blanchett, the star of Todd Haynes‘ lesbian-themed Carol, said she’s had relationships with women “many times.” She didn’t specify if these dalliances happened before or during her marriage to Andrew Upton, but it’s an intriguing confession any way you slice it. 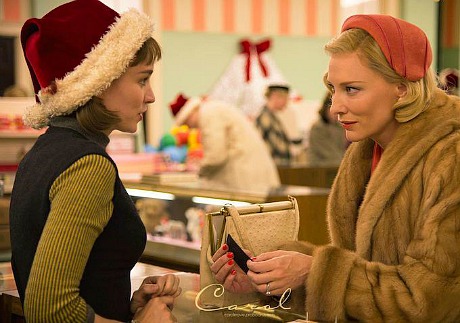 Quote: “When asked if this is her first turn as a lesbian, Blanchett curls her lips into a smile. ‘On film — or in real life?’ she asks coyly. Pressed for details about whether she’s had past relationships with women, she responds, ‘Yes…many times’ but doesn’t elaborate. Like Carol, who never ‘comes out’ as a lesbian, Blanchett doesn’t necessarily rely on labels for sexual orientation. ‘[I’ve] never thought about it,’ she says of how she envisioned the character. ‘I don’t think Carol thought about it.'”

Add to this beliefs about Blanchett’s Carol costar Rooney Mara having known similar intrigues, and you’re talking about a possibly interesting on-screen chemistry.

Not to mention (a) the script of Carol having been written (and re-written and re-written) by “out” playwright Phyllis Nagy, (b) the casting of “out” Carol costars Carrie Brownstein and Sarah Paulson, (c) the film having been produced by the same-oriented Christine Vachon and directed by Todd Haynes, and you have…I don’t know what you have or how good Carol will be or anything. But at least you have a good portion of the creative team coming from a similar place.

Blanchett also costars with Mara in Terrence Malick‘s Weightless, which was shot before Knight of Cups but has been wackadoodling in the editing room ever since. One could specualte that the years-old “musical drama,” which also costars Ryan Gosling, Christian Bale, Natalie Portman, Michael Fassbender, Val Kilmer and Benicio del Toro (and was produced by Portman), could come out in 2016 but with Malick you never know.

Setoodeh reports that Blanchett “filmed for four days on Knight of Cups and then two weeks on Weightless, a film for which she had to pseudo-improvise. ‘Terry would write reams and reams of poetry, and he’d give it to you in the morning,’ says Blanchett, who told the director she couldn’t memorize all those lines that quickly. So he’d read her the dialogue in an earpiece. ‘You’d say what you heard or misheard,’ Blanchett says.”

May 13, 2015by Jeffrey Wells32 Comments
« Previous post
Not Judges But Defense Attorneys
Next post »
Up and Down