Santa Monica’s Aero, my favorite Los Angeles theatre by a mile, has completed a major digital upgrade and will soon be screening mostly DCPs instead of celluloid. (There will be, no doubt, occasions when they choose to show a 35mm or 70mm film through their Norelco AAII film projectors.) To celebrate this new technological enablement, the Aero will show off their digital hardware with a “17-Night Series of Classics and Digital Restorations” from 7.12 through 8.4. 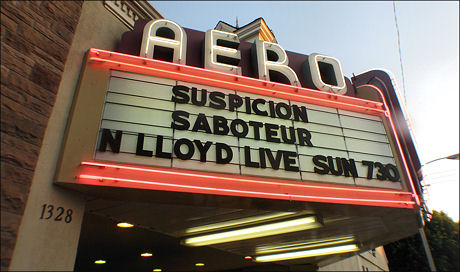 Be advised that the Casablanca screening on Friday 7.20 will almost certainly be the darker, distinctly grainier 70th anniversary version that constituted the last Bluray release. Get used to this, suck it in — grain-monk theology has won over the corporates along with masking ’50s films with 1.85 prison-cell croppings. If I was Absolute Bluray Dictator I’d order that two versions of all restored classics — “grainmonk” and “moderately shiny” — be issued simultaneously along with “headspace” and”1.85 fascist” versions. Then there wouldn’t be any fights.

Grover Crisp‘s M.I.A. restoration of From Here To Eternity will play on 8.2. The high-def restoration was first screened in the fall of ’09 and then in Cannes in May 2010, but it’s never turned up on Bluray.

Five years ago I wrote the following: “The restored Aero Theatre — the westside flagship for the American Cinematheque — is a single-screen venue on an affluent, relatively quiet Santa Monica boulevard. Nice people run it and nice people — a mostly older crowd — are always there. An Italian ice store is just down the the street, an antique furniture store that Mary Steenburgen is a co-proprietor of sits next to it. The whole quiet-community atmosphere is like a Valium. The vibe at the Arclight or the Bridge or the Monica Plex on Second Street is fine, but the Aero feels like yesteryear.

“Last night’s experience was very much like seeing a movie on a quiet summer night in a small town in the ’60s or ’70s. The Aero is a remnant of the modest- sized, personably-managed theatres that you could find in every last small town in America before the plexing boom of the ’80s. On top of which the sound and projection standards at the Aero are superb, and they’re always showing good films there.”