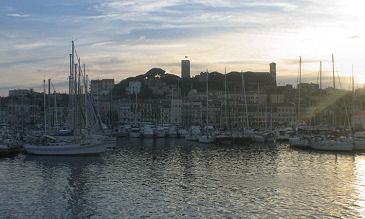 After the regrettable but inescapable duty of writing my reactions to Southland Tales (which could, it seems to me, be trimmed and refined and re-shaped to its benefit, so there’s another critical-reaction chapter yet to come…I hope), I shuffled out of the Palais and down the Croisette to a very pleasant HBO beach party, with the blustery winds buffeting the see-through plastic barriers that had been draped around three beach-facing sides of the tent. mPRm’s Michael Lawson and James Lewis were hosting, and I had a pleasant shmooze with senior vp media relations Nancy Lesser. Around 6:45 pm I arrived at a Southland Tales party on a Cadillac Escalade-type yacht called the Big Eagle in the Cannes harbor. I had a great talk with bright and engaging Senh Duong, the Emeryville-based creator and major domo of Rotten Tomatoes. I also had a good chat with Persistent Entertainment’s Matthew Rhodes, who hands-on produced and/or handled financing for Southland Tales, Walker Payne and Lasse Hallstrom’s An Unfinished Life, among several others. Rhodes is now preparing to produce The Beautiful Ordinary, a suburban high-school drama written and directed by Jessica Manafort, whom Rhodes said is cut from the same kind of imaginative, creatively audacious cloth as Southland‘s Richard Kelly.