We’ve all felt that peculiar irritation that kicks in when news of yet another “special collector’s edition” DVD of a classic film (single or double-disc…same difference) is announced. I say to myself “no, I won’t fall for it…screw those greedy DVD distributors trying to milk me for the second or third or fourth time.” Then I read that the new release will provide a “restored” and presumably improved transfer, and I’m hooked. Even if the transfer on a DVD of the film that I own looks perfectly fine. Because I’m a sucker for any upgrade. 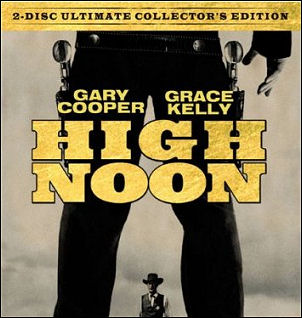 Especially, I should add, if the film is in black and white. I’m a total fool for that luscious silvery sheen. My biggest orgasm in this regard is that Columbia/TriStar Home Video release of Anatomy of a Murder, which came out eight years ago.
Lionsgate’s new two-disc DVD release of High Noon has “what appears to be a reliable report, though unconfirmed, that it will include a new transfer of the film, restored by Paramount,” according to a posting on the Amazon page by DVD aficionado “Sanpete.” He writes that “lack of agreement between Paramount and Lionsgate prevented the earlier release of a restored transfer,” adding that “the current and older DVDs are only of average video and audio quality.”
I haven’t verified the new transfer assertion, but knowing deep down that I’ll probably spring for this disc when it comes out on 6.10 is a real bee in my bonnet. To my fairly sophisticated eyes, there’s nothing the least bit problematic about the version that I presently own, a “collector’s edition” mastered by Republic Home Video and issued in ’02. But I know myself and what’ll happen when I see this on the shelf. I’m a junkie without brakes or discipline.