The Agony and the Banality

Let me explain something very plainly and with zero ambiguity: any critic or riffing columnist who calls Vacation “respectably funny” or a “really fun summer movie” or who says “I laughed my ass off” is to be immediately placed on the “do not trust when it comes to comedies” list for the next ten years. No commutation of sentence, no probation board — they cannot and must not be trusted until July 2025, and even then clouds of suspicion will linger. 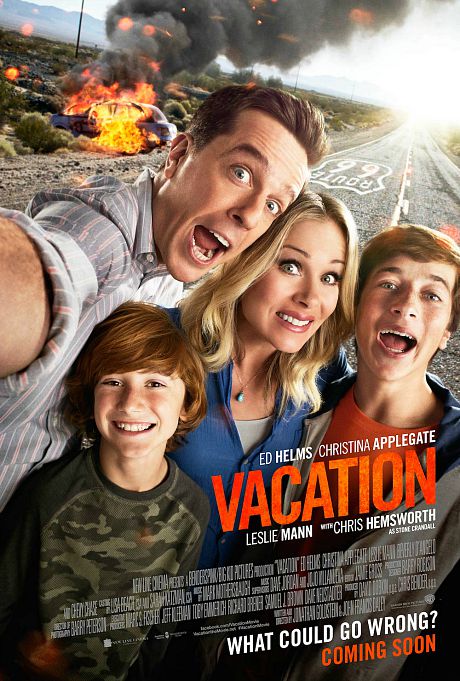 I’m not saying this because Vacation is stunningly unfunny, or more specifically ice-cold and misanthropic and toxic with contempt. I’m saying this because it’s a relentlessly one-note, one-joke device, and in so doing is like a kid who keeps poking you in the eye with his index finger, over and over and over. It makes you think awful thoughts. It drops you neck-deep into a cesspool of hate humor and humiliation gags and keeps you there.

Vacation is aimed at 10 to 14 year-olds who are so enraged and sickened by their parents’ appalling lack of coolness that any humiliation suffered by Helms and Applegate will be seen as wonderful and most likely hilarious.

I understand parent-hate. I used to regard my parents as gulag guards and think that 90% of the misery in my life would be instantly removed if I could somehow escape their tyrannical rule. They just didn’t get it. Everything they said was “no,” “not now,” “do your homework” and “time for bed.” But even then I recognized that they had…okay, perhaps a few qualities that might warrant respect in the outside world.

There’s something much darker and more misanthropic about Vacation‘s “humor.” The idea is that Ed Helms‘ Rusty Griswold, a somewhat underpaid pilot for a bargain-basement airline, and Christina Applegate‘s enabling wife Debbie, who are portrayed as lying, self-deluding, borderline psychotic and possibly brain-damaged cardboard humans, must be relentlessly punished for subjecting their kids to doofusy middle-class attitudes and a budget-minded lifestyle. And so Helms and Applegate are splattered in the face with this and that excrement milkshake and schooled on their cluelessness, again and again and again.

All good comedies make you feel like you’ve dropped a tab of mild mescaline; Vacation makes you feel enraged and vaguely nauseous. The idea of people paying to see Vacation this weekend…I don’t want to think about it. I know that I couldn’t stand it. I know that it makes you want to drive out to the desert and hike for ten miles and sweat and take two saunas and five showers.

I actually related to Skyler Gisondo‘s James, a 16 or 17 year-old who seems to understand concepts of transcendence and satori and knows something about the Merry Pranksters, but the movie humiliates him almost as much as it does Helms and Applegate.

Co-directors and co-writers Jonathan Goldstein and John Francis Daley will soon be as hated as that dentist who killed Cecil the Lion. They might need to (a) change their names, (b) think about submitting to 150 lashings with birch branches, or (c) drive out to the desert and hike for ten miles and sweat and take two saunas and five showers, and then move to Rosarito Beach and stay there.