Obama-Lincoln or Obama-FDR? I’m sensing that he’ll turn out to be some kind of hybrid of the two. Here’s hoping, at least. Most semi-educated people out there (who may or may not constitute more than 50% of the over-18s) as well as those who read weekly news magazines (which is what,10% or 15%…if that?) probably prefer the former. BHO’s giving the absolutely traitorous Joe Lieberman a pass is one indication of a Lincoln-esque temperament. Personally I’m more of a send- your-enemy-a-dead-fish-wrapped-in-a-newspaper kind of guy. I realize Obama’s way is probably wiser and more productive. 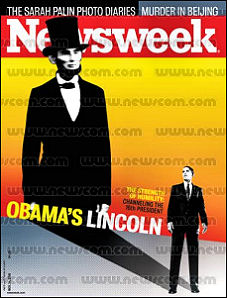 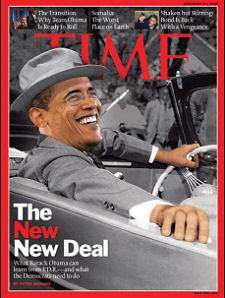 The current covers of Newsweek and Time.

“The theme of Obama’s Inauguration is taken from a line in Lincoln’s Gettysburg Address: ‘A New Birth of Freedom,'” the Newsweek story reads at one point. “Asked in January by CBS anchor Katie Couric which book, aside from the Bible, he would find essential in the Oval Office, Obama answered, “Team of Rivals.” Doris Kearns Goodwin‘s 2005 bestseller recounts how Lincoln surrounded himself with advisers who were better educated and more experienced and who made no secret of coveting Lincoln’s job.

“Goodwin, who has spoken with Obama about her book, thinks he has absorbed the deeper meaning of Lincoln’s leadership style. ‘I think he’s got a temperamental set of qualities that have some resemblance to Lincoln’s emotional intelligence,’ Goodwin tells Newsweek.”