Ain’t Goin’ For It

I’ll always be in awe of Harvey Weinstein‘s chutzpah, but Inglourious Basterds isn’t going to win the Best Picture Oscar. How do I know this? I don’t, not for certain. But I do know that the season has been dragging on and that entertainment journalists are getting bored and need to come up with scenarios that allow for some variation of the c.w. — i.e., the winner will be either Avatar or The Hurt Locker. 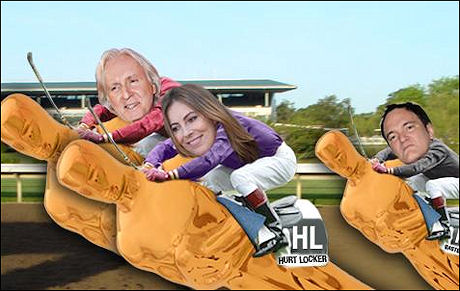 I’m also sensing that the Movie Godz, the aspirational angels of our nature, are feeling a wee bit antsy as we speak, and have taken to hovering like the monochrome Bruno Ganz and Otto Sander in Wings of Desire and intimating/whispering “don’t…don’t do this…not the baseball-bat movie…think of how you’ll feel the next morning.”

But if you want to trip out on an IG fantasy, consider Pete Hammond‘s Notes on a Season article that was posted seven days ago. Or Steve Pond‘s piece in The Wrap (which borrows most of its material from Hammond’s piece). Or Tom O’Neil‘s piece on Gold Derby/Envelope/L.A. Times. Or Jack Matthews‘ article for Moviefone. They’re all riding this bullshit horse.

“Harvey Weinstein has been pulling out all the stops,” Pond writes, “flatly proclaiming that Basterds is going to win Best Picture.” Fine — Harvey wouldn’t be Harvey if he didn’t strut around. “To that end, Quentin Tarantino has been making constant public and private appearances. Audi sponsored a packed party for film and director. Norman Lloyd and Roger Corman threw a smaller lunch at Musso and Franks.

“The latter gathering seemed to suggest that Tarantino has the approval of an odd subset of the Academy, voters like Mickey Rooney, who told the L.A. Times that he doesn’t see new movies.

“Under that system, voters are asked to rank all 10 nominees from first to last. Unless one film gets more than 50 percent of the first-place votes – which, let’s face it, is virtually impossible in this year’s race – the film with the fewest Number One votes will be eliminated. Its ballots will then be redistributed into the pile of whatever film is ranked second on each ballot. The process continues, with the last-place film eliminated in each subsequent round, until one film winds up with a majority of the votes.

“The system means that Number One votes alone won’t be enough to propel a film to victory — it’ll also need to be ranked second or third on lots of ballots if it wants to hit that magic number.

“Avatar, it seems, should get lots of Number One votes – but it might also be ranked pretty low on the ballots of voters who don’t think it’s the best, leaving an opening for another film that’s more of a consensus favorite to ride to victory on the strength of more second- and third-place votes.”

When O’Neil predicted a Basterds win last November I wrote, “Trust me — it’ll never happen.” This morning he notes that “Mathews is saying it really might happen and I still say it will.” I’m fine with all this crap. The fever dream of a three-way race is better than an either-or. Without it things would be fairly flat, and we still have two and a half weeks to go.

Wells to Mickey Rooney: If you don’t see new movies you should resign from the Academy. No ifs, ands or buts.