Australian film journalist Sam Cleveland sent me a link to a few pages of what may be Jon Spaights‘ script for Ridley Scott‘s upcoming Alien prequel movie, otherwise known as Alien Harvest. I’ve no way of verifying if this is Spaights’ script, but it sure reads like a solid, grounded pro-level thing. 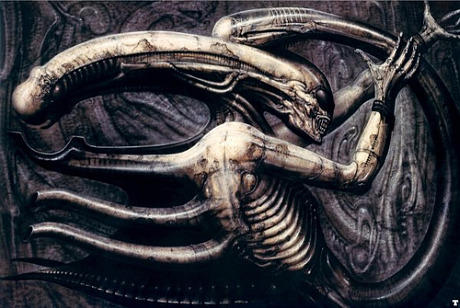 On 6.14 Coming Attractions Patrick Sauriol wrote that “sometime in early January 2010 the Alien Harvest PDF file was uploaded to the Scribd file-sharing website. (Except it isn’t there now.) The 122-page script is credited to Jon Spaights, the screenwriter hired to write the untitled Alien prequel that Ridley Scott was developing at Fox.”

On 4.26 Rope of Silicon‘s Brad Brevet quoted Scott’s explanation of what the 3-D Alien Harvest (which may, according to reports, be a two-parter) will basically be:

“It’s set in 2085, about 30 years before Sigourney [Weaver’s character Ellen Ripley],” Scott said. “It’s fundamentally about going out to find out ‘Who the hell was that Space Jockey?’ The guy who was sitting in the chair in the alien vehicle — there was a giant fellow sitting in a seat on what looked to be either a piece of technology or an astronomer’s chair. Remember that?

“[The] main character [in the prequel] will be a woman, yeah.” [The woman in the script excerpt is called Debbie.] “We’re thinking it could go down that route, yeah. When I started the original Alien, Ripley wasn’t a woman, it was a guy. During casting, we thought, ‘Why don’t we make it a woman?

“Scott adds he will need to design ‘or redesign’ the appearance of the alien creatures saying, ‘I don’t want to repeat it. The alien in a sense, as a shape, is worn out.” He also says he will again consult with original Alien designer H.R. Giger.

“Scott was also quoted…saying he’s looking to make two new Alien prequel films referring to them as ‘prequel one and two,’ but right now the focus is on the first film only.

Sauriol’s 6.14 descriptions of Alien Harvest is more thorough and more particular than Brevet’s.