Pete Davidson during last night’s “Weekend Update”: “[Masks weren’t a refuge] because everyone can still recognize me from my eyes. When you see someone who looks like he just woke up and hasn’t slept in days, it’s me.”

With these words Davidson, whom I’ve regard as a great, nakedly honest, world-class actor-writer-comedian since catching his performance in The King of Staten Island, acknowledged that he’s not Cary Grant, and that he radiates a basic mood medication-meets-Staten Island strangeness. And so he was encouraged (told) to grow out or otherwise “normalize” his hair for Judd Apatow’s film.

But since King opened, Davidson has been rockin’ a tennis ball, despite the universally accepted maxim that guys with extreme facial features need to modify this with a little hair flow…a little follicle smoothitude.

Davidson seemed to be saying last night that he’ll soon be leaving Saturday Night Live. Presumably so he’ll be free to play supporting oddballs in DC and Marvel films. What he needs to do is star in another King of Staten Island-type feature, but without the stoner friends or the Staten Island backdrop. He needs to play the witty, sexy, unbalanced guy of the 2020s…to play “Pete Davidson” in a long series of real-deal, here-and-now, cultural-state-of-things comedies, romantic and otherwise. He needs to be a new strain of the Woody Allen thing.

PD: “AIDS is just like SNL. It’s still here, except no one has gotten excited about it since the ’90s.” 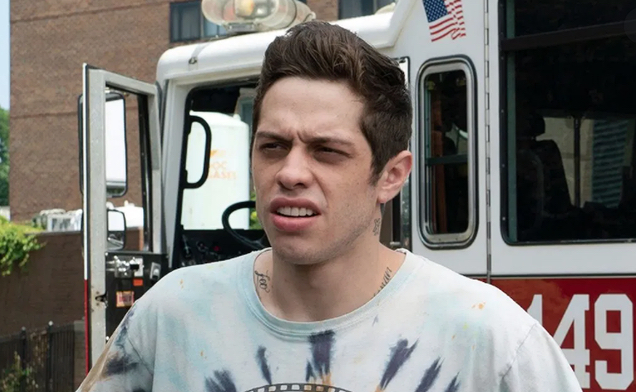