All Nominees Are Winners!

I was going to run this story as an HE stand-alone but Franklinavenue and Slashfilm‘s Germain Lussier beat me to it. In new TV spots Weinstein Co. marketers are claiming that August: Osage County and Philomena are the “winner[s]” of some significant Golden Globe nominations. There are all kinds of flattering ways you can legitimately describe the honor of having been nominated by the HFPA. But you really can’t say that a film has won a nomination. That’s not stretching the truth — that’s a three-card-monte flim-flam. By Weinstein Co. standards if you’re chatting up a really hot lady in a nice bar in the Flatiron district, it’s the same as…well, not the same as going home with her and having mad acrobatic sex for four or five hours, but pretty much the same as making out with her in the back seat of a cab. Or something like that. Being nominated means you’re just talking to her at the bar, period. Okay, maybe she likes you and maybe she’s on her third drink, but it’s just talk. 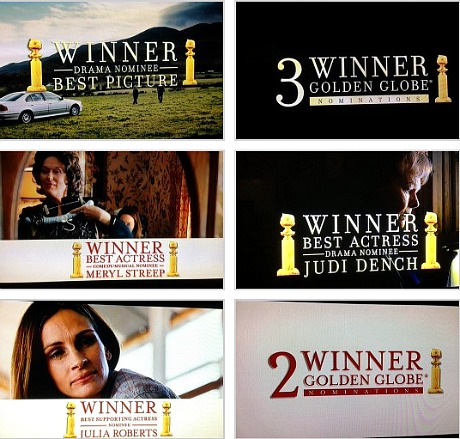