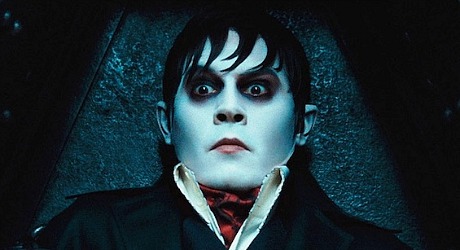 “There’s no denying that Dark Shadows is a bit of an oddity, flip-flopping between comedy and gothic melodrama,” Adams begins. “These tonal swings are not always convincing, but it doesn’t detract from the fact that the film is a good chunk of nonsense fun, clearly made with love and style.

“Just as importantly, the film is one of the more gratifying of the now eight collaborations between director Tim Burton and leading man Johnny Depp — eschewing the irritating character quirkiness for quirkiness’ sake that crept into Charlie and the Chocolate Factory and Alice in Wonderland.

“[But] in the film’s final third, Barnabas suddenly becomes sexual catnip for the forward women of the 1970s, and the film starts losing its grip. And unfortunately Eva Green sits at the centre of the chaos. It’s no fault of the actress, but her scarlet-lipped Angelique seems present simply to introduce all-too-predictable conflict and drive the plot…when a focus on the tender courtship between Barnabas and the sweet Victoria (Bella Heathcote) would have made for a better narrative.

“In fact Dark Shadows would probably have been a very different film if it was centered on Heathcote’s character, and scrounged up some real substance instead of sticking to the slick, superficial and obvious.

“[So] it’s a genuine pity that everything becomes such a mess during Dark Shadows‘ climax. This is not an uncommon problem with Burton films actually (remember Beetlejuice?), as they stumble over their own feet racing for resolution after a lengthy set-up. So suddenly there are betrayals, explosions and angry townsfolk as well as a supernaturally powered battle, peppered with ‘WTF?’ revelations and nifty special effects.

“Ultimately the film works best as a black comedy – a quirky tale of family dysfunction with a dash of horror for extra flavor. It gets completely overblown by the end, but that doesn’t detract from the initial enjoyment it provides. Fun, but very flawed.”