“I’ll remember you, honey,” a sassy Paul Newman said to Patricia Neal as she stepped onto a bus in Hud. “You’re the one that got away.” Actually Neal, who died yesterday of lung cancer at age 84, was the one who stuck around and toughed it out.

She led a long, distinguished, sometimes tumultuous life, and yet her most lasting impression — for fans like myself anyway — is that of a cultivated, unfussy woman who, in her prime, was probably amazing in bed. You’re not supposed to mention stuff like this when a respected octogenarian philanthropist (which Neal was) passes away, but I would have loved to have gotten lucky with her around 1950 or so, around the time she made The Day The Earth Stood Still. A little while after the end of her three-year love affair with Gary Cooper, I mean, and before she met Roald Dahl, her husband of 30 years, in ’51.

Neal is also remembered, sadly, as the actress who got hit with awful cards when two of her children with Dahl suffered tragedy — a son brain-damaged by a taxi accident in Manhattan, a daughter dead from measles at age 7. This was followed by Neal herself being nearly destroyed by three strokes — i.e., cerebral aneurysms — in ’65. She was left immobile and speechless, but gradually recovered. Neal returned to acting in ’68 with The Subject Was Roses.

“I think I was born stubborn, that’s all,” Neal says in a biography on the website of the Patricia Neal Rehabilitation Center. 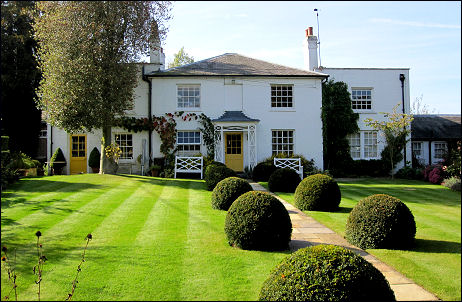 And then she divorced Dahl in ’83 after learning of his affair with Felicity Crosland, whom Dahl married and stayed with until his death in 1990. Neal had lived with Dahl at his Gipsy House estate in Great Missenden, England (where I visited last fall during the Fantastic Mr. Fox junket) for 25-plus years. She lived the remainder of her life in New York and Martha’s Vineyard.

For me, Alma is her greatest performance, closely followed by her portrayal of an ambitious TV journalist in A Face in The Crowd. It’s odd that her work in Hud led to a Best Actress Oscar as Alma is clearly a supporting role. Hud is an ensemble thing, but it obviously belongs to Newman with Neal and her two costars, Brandon de Wilde and Melvyn Douglas, vying for secondary honors. I’m not saying Neal didn’t earn it. She was awesome in the part.

I love her Alma-isms. I love her earthy drawl and the way she hands out peach ice cream on the front porch after dinner. I love the way she places a cold glass of lemonade on De Wilde’s forehead after he’s been kicked around inside a cattle pen. I love the sexual tension in her scenes with Newman. “Ahve already spent time with one cold-hearted bastard,” she says after he’s made an unwelcome pass. “Ahm not lookin’ for another.” You believe her for the most part, but not entirely.

I haven’t even mentioned her performance in The Fountainhead (1949). It’s hard to like that film because the Ayn Rand dialogue sounds so pretentious. (“I wish I had never seen your building,” Neal says at one point. “It’s the things that we admire or want that enslave us. I’m not easy to bring into submission.”) At least she gets through it without sounding dopey or bewildered.

Very few have seen Neal in a 1964 black-and-white film called Psyche ’59, although it’s watchable on YouTube.