It’s warm today in Los Angeles — 65 degrees and only 11 am. The cold snap (evening temps in the 40s, which felt like 30s due to winds) is over for now. Soon it’ll be March, and then comes April and May. And then the fifth anniversary of the 6.19.13 death of James Gandolfini. I’m mentioning this because this morning I happened to re-read one of the ugliest comment-thread pile-ons in the history of this column. It followed a plainly-written “this is how it happened” piece about my having “crashed” (in a vague manner of speaking) Gandolfini’s funeral service at Manhattan’s St. John The Divine on 6.27.13.

For two days I was seething with rage while coping with a broken heart. The ugliness amazed me although a few commenters, at least, understood and respected the fact that I attended out of love and respect. Variety‘s Stephen Gaydos said it best in 6.28.13 post: “Wells is a huge [Gandolfini] fan and so he paid his respects to a guy who was talented and died too young. Those are the facts. The rest is cockatoo chatter.”

At the end of a local ABC News report about the funeral[above], the anchor guy states that “the funeral was closed to the press.” The beat-down I received that day was partly about my having claimed that press wasn’t invited (or at least that I wasn’t) and that I had to circumvent stern-looking women with clipboards who were checking names, etc.

Here it is again: “I got hated on big-time for tweeting about having crashed James Gandolfini‘s funeral this morning at Manhattan’s St. John The Divine. Yes, I flippantly used the term “funeral crasher!” because that’s what I was. But it’s the singer, not the song. The haters ignored the fact that I (a) asked for God’s forgiveness in having crashed, (b) ascribed my crashing success to the intervention of angels, and (c) said that I crashed with reverence and respect for James, David Chase and all the “made” Sopranos guys. The rush-to-judgment pissheads simply weren’t listening. They never do. They’re scolds…shrill finger-wagging scolds going “tut-tut!” and “no, no, no!”

“I didn’t crash Gandolfini’s funeral like some giggling monkey, and I didn’t take the subway up there this morning with the intention of crashing. I crashed it solemnly like some devoted choirboy or Sopranos family soldier. I just grimmed up and shuffled up the cathedral steps and…well, go ahead and laugh but I honestly believe that I got past security because some angel from heaven who lived in my area of New Jersey when he or she was mortal happened to look down from heaven at that moment and said ‘whoa, wait up…he’s okay…fuck it, let him through.’

“I’m from Westfield and a Sopranos devotee from way back and I think my getting in was meant to be. Because when you think about it, I shouldn’t have made it through. I wasn’t even wearing a dark suit like everyone else, and I was carrying my olive-drab computer bag. Who goes to a funeral in brown corduroys and a black T-shirt and a black waist-length jacket and a computer bag except a journalist? Somebody up there likes me, I swear to God.

“Inside the main cathedral door were three women dressed in black with clipboards and lists, checking names. I just slowly but stealthily sidestepped them and slowly made my way to the bag-checking guy who was standing at a desk, and then to the metal-detector guy. The latter wanded me and seemed a tiny bit alarmed when he got a “beep!” from two tins of Altoids I had in my left jacket pocket. “I’m gonna have to see what that is, sir,” he said. “Sure thing, man,” I answered, and pulled out the bigger of the two Altoid tins. He wanded me again….beep! “That’s another tin of Altoids,” I told him.

“Anyway we got through the Altoids when suddenly a security lockdown order was given and I had to take two steps back and wait until New Jersey Governor Chris Christie and his security detail walked through the main door and into the seating area. Christie doesn’t look as massively fat as he did around the time of Hurricane Sandy — he’s had gastro-intestinal surgery. 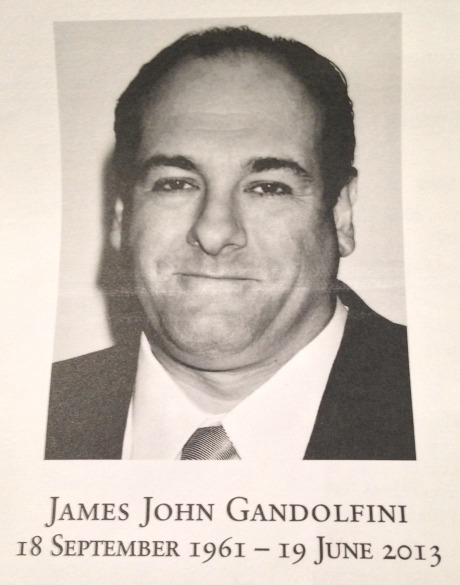 “I was finally allowed to go into the cathedral, but then I ran into three more women dressed in black. One of them asked what section I was assigned to and I just said “section C” but she probably thought I meant “section 3,” which was where the lower-class serf invitees were being seated. She asked my name and I said ‘Jeffrey Wells’ and then I mentioned that I had contacted Gandolfini’s management company, Sanders Armstrong Caserta, which was true. For whatever reason she let me through and I was home. I couldn’t fucking believe it. I wanted so much to be a part of this thing and here I was. It was gracious fate, a favoring breeze, something.

“When it was over I went up to David Chase and said ‘hey, David’ and shook his hand and reminded him that we’d spoken at the Not Fade Away party in Laurel Canyon about four months earlier. I didn’t say anything after that. I just nodded and he nodded back. We knew. And you know what? I handled myself better during that little moment than any of those Twitter bitches would have handled themselves. I honestly feel that as difficult and laborious as my column-writing life seems at times, on some level I lead a charmed life. Like this morning.

“I could describe the funeral itself but Variety‘s Scott Foundas has done that pretty well. And here’s a transcript of Chase’s remembrance.

“The service was sad, touching, very traditionally Catholic and not too long, thank God — it ran about 95 minutes. Gandolfini’s coffin was wheeled in on a gurney rather than carried by pallbearers. It seemed like an extra-large size. It was covered with an ornate Catholic drape or flag or tablecoth or whatever you want to call it. Violet with a large red stripe down the middle, and with gold Latin lettering along the fringe.

“Near the end of the service I took Holy Communion, which I haven’t done since I was 11 or 12. I didn’t sip the wine but I ate the wafer. There’s something oddly comforting about sitting through a service like this. I don’t mind the rituals of organized religion, in and of themselves.”

February 25, 2018by Jeffrey Wells11 Comments
« Previous post
“Could You Come By To Discuss These X-Ray Results?”
Next post »
The DeBonting