HE reader Phil Garcia had a somewhat annoying time watching The Tree of Life in Scottsdale, an affluent suburb of Phoenix, at the Harkins Camelview on East Highland. But not because of his own reaction to Terrence Malick‘s film. Here’s how he tells it: 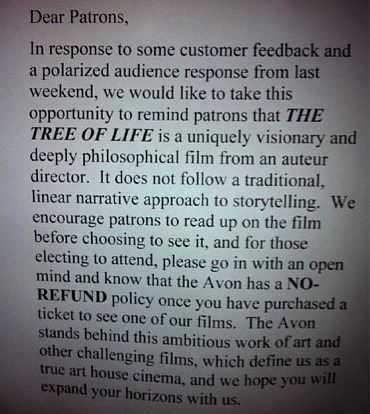 “I just finished listening to Oscar Poker # 36 where you comment that you cannot imagine anyone hating The Tree of Life,” he writes. “Well, I went to a 6 pm screening on opening day. The theater was jam-packed, mostly with a geriatric crowd. The movie started out okay, but once the ‘creation of life’ sequence started the crowd went south in a hurry. There were no less than 25 walk-outs.

“I’ve been in movies where a few people have walked out of the theater, but I’ve never seen such a mass exodus in a movie. There were people talking all through it. ‘I don’t get this.’ ‘Do you understand what’s going on?’ ‘This is terrible.’ This went on and on. People were still walking out when there was only ten minutes left.

“And it’s not as if the ‘creation of life’ sequence is that esoteric or incomprehensible, right? Perhaps it’s a matter of context. If the same images were a part of some IMAX documentary about the origins of the universe people would not care. Plop the same images in what is suppose to be narrative cinema and people lose their minds.”