An Appearance Of Propriety 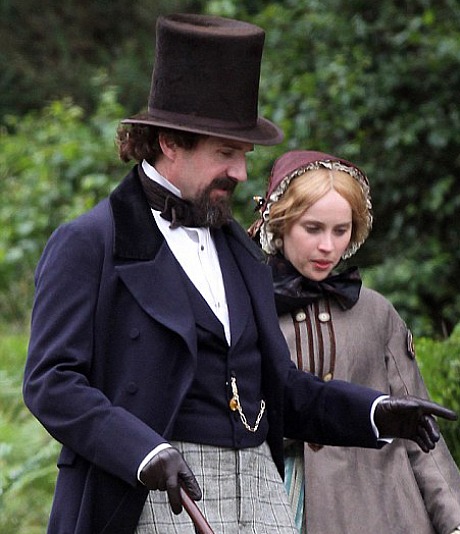 This sounds intriguing as far as it goes, I suppose, but — I may as well admit it — Jones is not my idea of a smokin’ Victorian-era love object. I’m sorry but this was one reason I felt underwhelmed by Drake Doremus‘s Like Crazy.

Morgan’s script is based on Claire Tomalin‘s same-titled book. “The main reason that Nelly Ternan does not appear in most accounts of Charles Dickens was because he and others worked so hard to protect his image of respectable Victorian morality,” an Amazon reviewer writes. “After his death, Ternan kept quiet as well because of her fear of scandal and humiliation. The second reason had to do with Ternan’s origins: as an actress and as a member of an acting family, she belonged to a class of women not considered respectable. Ironically, Charles Dickens first met Ternan through his own fascination with the theatre: when her family were hired by his amateur theatrical company.

“After Dickens died in 1870, Nelly Ternan married a schoolmaster with whom she had two children.”

A BBC Films production, The Invisible Woman is slated to open in England on 2.7.14.

Postscript: In a 7.22 Telluride spitball piece, In Contention‘s Kris Tapley mentioned “definitive rumblings” about The Invisible Woman turning up.