It’s 85% my fault for being late for today’s 11 am press screening of Craig Gillespie‘s Million Dollar Arm (Disney, 5.16). (The MTA and more particularly the F train are 15% at fault, but let’s not get into that now.) So I arrived at the 42nd Street E-Walk at 11:35 am, which was roughly 30 minutes after it started. (I didn’t think I’d miss much if I began at the half-hour mark as it would be all set-up about Jon Hamm‘s sports-agent character having career trouble and deciding to go to India to find some talent.) But E-Walk management wouldn’t let me in. The manager’s first name is/was Kumudu. I took his picture four times and he kept blocking with his hand. He said that the Disney-affiliated publicist had left instructions for no one to be admitted after she left. What are the odds, honestly, that some wino or internet psychopath or axe murderer is going to ask for entry to a screening that no one except Disney and journalists know about? I tapped out the following to Disney publicity after realizing it wasn’t happening: “Came all the way up from Brooklyn with subway delays and other hassles, and E-Walk management wouldn’t let me in, per Disney’s instructions. Thanks very much. Is there another screening tomorrow? I can’t believe you & yours would instruct E-Walk management to deny access to invited journos. Brilliant! I guess I’ll just buy a ticket if all else fails.” A journalist friend who saw it this morning just called: “Jerry Maguire meets Slumdog Millionaire…a lot of it really works really well.” 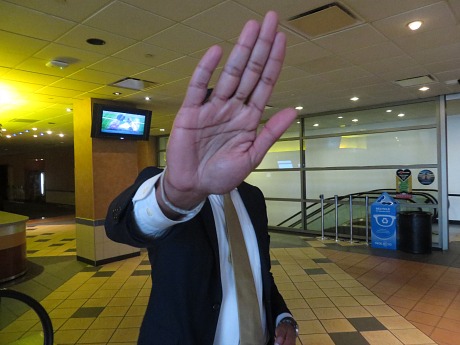 The hand of Kumudu during a discussion about why he was denying me admission to the press screening of Million Dollar Arm.

May 7, 2014by Jeffrey Wells79 Comments
« Previous post
Happening Right Now
Next post »
Another Thorn In Side of 1.85 Fascism