Dan Gilroy‘s Roman J. Israel, Esq., which screened on late Sunday night at the Ryerson, is a whipsmart, cunningly performed, immensely satisfying film in so many ways. Such a skillful job of character-building on Gilroy’s part, layer upon layer and bit upon bit, and such a finely contoured performance by the great Denzel Washington.

My only hang-up is that I wanted a different ending. Not that Gilroy’s ending is “bad”, per se, but I didn’t agree with it. I didn’t want it.

Otherwise this is such a brilliant, invigorating and fully believable film for over-30s — milieu-wise, legal minutiae-wise, Asperger’s-wise. It’s my idea of pound cake topped with whipped cream and strawberries…give it to me. You can take a terrific bath in this film and never feel unsatisfied that the story isn’t quite delivering the way you want it to.

Until the last 25 or 30 minutes, that is, but even then it’s not a fatal problem, just an air-escaping-the-balloon one. 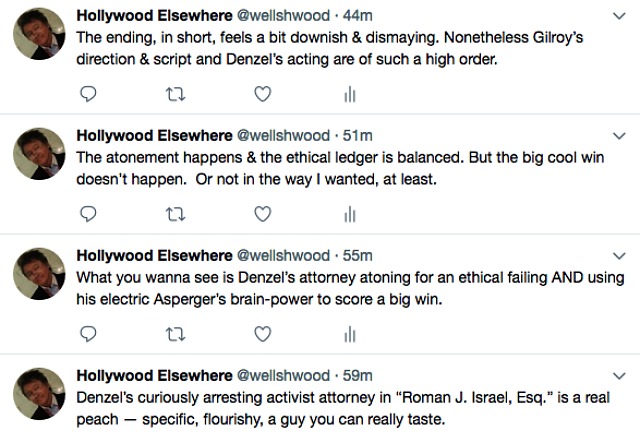 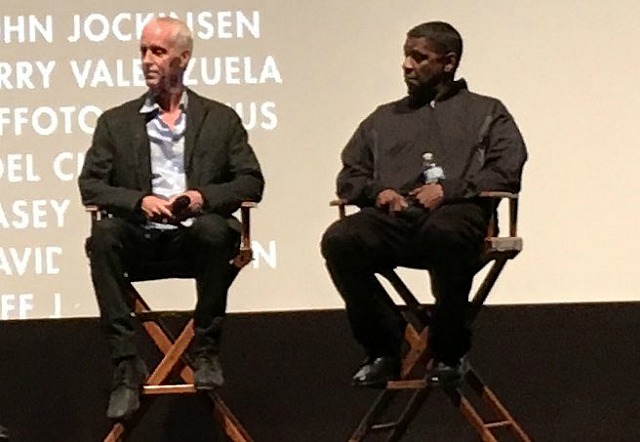 7:01 am update: Variety‘s Owen Gleiberman agrees with me — a wonderfully detailed Gilroy character, superb Washington acting but with a less-than-satisfying third act:

“The way Roman J. Israel, Esq. is set up, the film should be building to a moral-legal confrontation that tests everyone involved. Instead, it’s content to be a character study; but the audience, after a while, may not be so content.

“Roman gets assigned to the case of a young man (Niles Fitch) accused of murder (he tagged along when his buddy killed a convenience-store clerk). After a while, Roman goes through with an action that seems, in movie terms, to be justified: He turns the identity of the killer over to the victim’s relatives, gathering a private reward of $100,000. Legally, it’s a dicey thing to do, but no one innocent has gotten hurt, and Roman uses the money to put himself through a transformation that feels good.

“He buys real suits. He rents a fabulous apartment. He brushes back his hair. He scarfs honey-and-turkey-bacon donuts. He goes on a date with Maya (Carmen Ejogo), who runs a non-profit and, in her small way, is carrying on the dream of Roman’s formative era. The audience surveys all of this and approves, because Roman J. Israel, Esq. looks like a guy who could use a break.

“But the reward money comes back to haunt him. And that seems, in the end, a little facile. The movie turns into a war of signifiers, an archetypal L.A. battle pitched between going-for-the-bucks and holding-on-to-your-values. We’ve seen that battle before, a few too many times, and Roman J. Israel, Esq. doesn’t play it out in a particularly satisfying way. It leaves us with a character you won’t soon forget, but you wish that the movie were as haunting as he is.”