Three years ago the word went out among a rarified strata of film critics and feature writers that seriously praising House Bunny star Anna Faris was a hip thing to do. And now New Yorker writer Tad Friend is calling her “Hollywood’s most original comic actress” — sorta kinda Judy Holliday in a coarse-obvious-stoner vein. 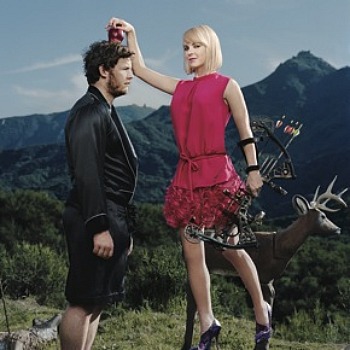 Maybe, if you say so, but Faris, I swear to God, is never very funny. Puckish and animated but…huh? Always playing highly spirited, slow-on-the-pickup (okay, semi-stupid) women who are parked (or driving around in circles) in their own cul de sac. Honestly? The only thing she’s done that I’ve even half-liked is when she played herself in three Entourage episodes in 2997. Okay, I half-enjoyed her Cameron Diaz imitation in Lost in Translation but…well, let’s get down to it, shall we?

Faris isn’t bad and could perhaps someday be special, but so far she hasn’t worked with top-drawer directors and writers. She’s been more or less scrounging around with second-raters. Her next movie is Mark Mylod‘s What’s Your Number?, about a girl wondering if one of her 20 lovers was the one and she somehow missed that. Are you going to tell me this isn’t going to be another perky piece-of-shit girlie comedy? With a premise like that?

“Onscreen, Faris is fearless,” Friend writes in his article, “Funny Like A Guy.” “Her trademark is the power-through: after her character has done something incredibly stupid or embarrassing, she doubles down. Mentions Mark Mylod, Ryan Reynolds, Amy Pascal, Seth Rogan.

“The Bechdel Test is a way of examining movies for gender bias. The test poses three questions: Does a movie contain two or more female characters who have names? Do those characters talk to each other? And, if so, do they discuss something other than a man? An astonishing number of light entertainments fail the test. This points to a crucial imbalance in studio comedies: distinctive secondary roles for women barely exist. For men, these roles can be a stepping stone to stardom.

“On the other hand, relatively unraunchy female-driven comedies have all done well at the box office. So why haven’t more of them been made? The answer is that studios, as they release fewer films, are increasingly focused on trying to develop franchises. Female-driven movies aren’t usually blockbusters, and studio heads don’t see them as repeatable. Men predominate in Hollywood, and men just don’t write much for women.

“Relatability for female characters is seen as being based upon vulnerability, which creates likability. So funny women must not only be gorgeous; they must fall down and then sob, knowing it’s all their fault. Ideas for female-driven comedies are met with intense skepticism, and it’s even more intense because Faris isn’t aiming at the familiar Type A roles played by Jennifer Aniston and Katherine Heigl. She said, “I’d like to explore Type D, the sloppy ones.” Mentions The House Bunny and Observe and Report.”