The N.Y. Times has now jumped into the Band’s Visit vs. Beaufort spat, with the Jerusalem-based Isabel Kershner reporting in a 10.30 story that “unnamed producers” of The Band’s Visit have been quoted as “accusing the makers of Beaufort — and director Joseph Cedar in particular — of having drawn the academy’s attention to the rule about the predominance of English, leading to the disqualification of The Band’s Visit. 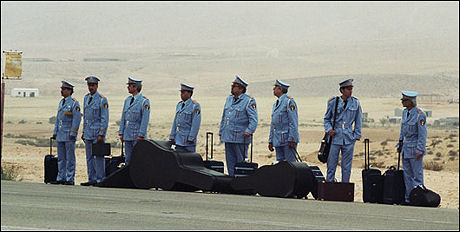 After this story appeared in an Israeli newspaper on 10.14, Cedar “was quoted…as acknowledging that his producers had raised the issue with the Israeli academy, but denying any contact with the American one.

Cedar tells Kershner that “having to defend himself against accusations of being behind the disqualification of The Band’s Visit is “ludicrous, preposterous. I can understand the argument that the academy rules may be too strict, [but] we have absolutely zero to do with the disqualification. We didn’t make the rules, or put the English in that script.”