A little digging into chat boards about Lars Von Trier‘s Antichrist, a horror film with Willem Dafoe and Charlotte Gainsbourg, and Gaspar Noe‘s Enter The Void — both of which are looking like good (or at least somewhat likely) bets for the 2009 Cannes Film Festival — has revealed some unreliable but harmless poop. Take it with a grain. 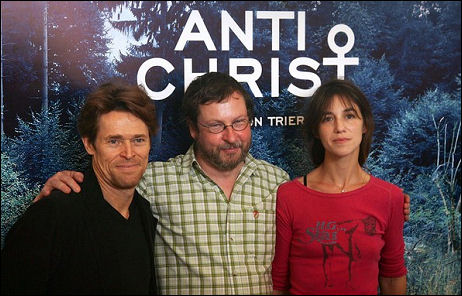 Antichrist is said to be “quite good, special and bloody” with one poster speculating that Von Trier was perhaps “a little bit inspired by some Asian directors out there.” He/she also calls it “a movie with lots of layers” (as opposed to a single layer?) with amazing performances from Dafoe and Gainsbourg.

Another guy claims “it is not the same film [Von Trier] originally announced he was making. The producer Peter Aalbaek Jensen gave away too much of the plot to journalists, and in response Lars wrote an entirely new script with another writer. It was originally a horror film about a demiurge” — a deity responsible for the creation of the physical universe — “but now it’s a horror movie about two bankable actors in a forest with a few trained animals.”

That is absolutely the cleanest and funniest one-line horror film synopsis that I’ve ever read in my life.

Twitch‘s Todd Brown reported from the Berlin Film Festival about an eight-minute promo reel from Enter The Void that Noe introduced at the European Film Market.

“The screening came with a number of caveats — unfinished color correction, unfinished sound design, temporary effects, etc — and while I can certainly understand why Noe would want to declare those things up front there was really no need. This thing looks absolutely stunning as is. Considering that very little has been said about the film publicly so far I’ll refrain from commenting on plot points and keep myself to just this. 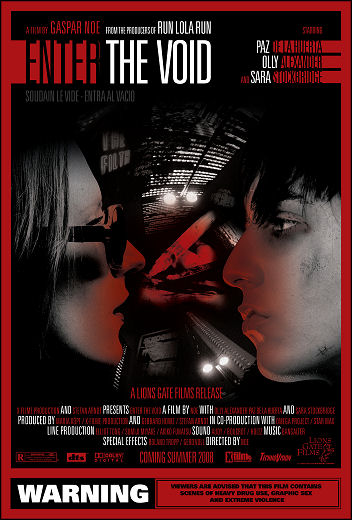 “First, Noe will show you Tokyo as you’ve never seen it before. Second, while this is very clearly the work of the same man who made Irreversible and no less difficult and troubling, it seems as though much of the anger of that film has been stripped away and replaced with a sort of sad, wistful nostalgia — instead of railing at life gone wrong as he did previously — Noe seems to be moving to a sort of quiet acceptance and resignation. This is truly potent, stunningly visual stuff from one of the world’s most talented and unique directors.”

“The visions described in the script are inspired partly by the accounts of people who have had near-death experiences, who describe a tunnel of light, seeing their lives flashing past them and ‘astral’ visions, and partly by similar hallucinatory experiences obtained by consuming DMT, the molecule which the brain sometimes secretes at the moment of death and which, in small doses, enables us to dream at night.

Noe is quoted as having said that the film “should sometimes scare the audience, make it cry and, as much as possible, hypnotize it.”

An apparently legitimate poster for Enter The Void warns viewers of “heavy drug use, graphic sex and extreme violence.” Sounds like good ole Gaspar to me. What was that about “sad, wistful nostalgia” and “quiet acceptance and resignation”?