I’m pretty much at peace with having blown off this morning’s 8:30 am screening of Johnnie To‘s Vengeance. I did the bad thing last night by staying out at the Taking Woodstock party until close to 2 am, and I needed the shuteye. To’s film stars Johnny “have a Gitane” Hallyday as a former French hitman in Hong Kong out to avenge his daughter’s murder. All right, I feel a little guilty but it’ll pass. I’ll catch it tomorrow at the Salle de Soixantime. 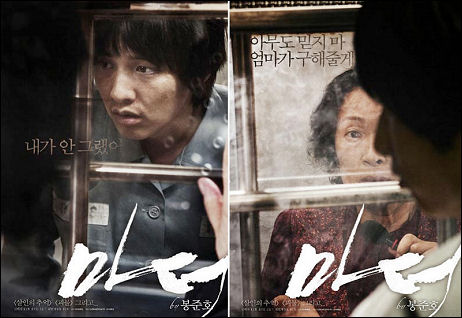 I saw two and a half movies yesterday, the “half” due to a boredom walkout. I bailed on Warwick Thornton‘s Samson and Delilah, a breathtakingly dull film about a small community of Aborigines wiling away the hours with minimal energy expenditure in the Australian outback, after an hour or so. A love story between a pair of teenagers gradually developed but it wasn’t enough to hold me. Next came Brilliante Mendoza‘s Kinatay, a meandering, tension-less, faux-morality tale by way of a verite snuff film. It’s about a young Phillippine police cadet who experiences his first torture-murder on a freelance job for a group of Manila mobsters. (Scattered boos as it ended.) And then at 10 pm I saw Bong Joon Ho‘s Mother, a richly stylized Brian De Palma-esque thriller about a mom who mightily endeavors to prove that her mentally handicapped son, accused of killing a young girl, is innocent.

There’s no doubting that Bong Joon Ho is a DePalma devotee in the same way that DePalma was a Hitchcock acolyte in the ’70s and ’80s. Mother was by far the most interesting sit because of his immaculate and exacting composition of each and every element. The result is consistently flourishy and at times operatic — deliberately unnatural, conspicuously acted, very much a director’s film. Ho is coming, however, from a fairly well-worn genre place, although I’ll give him points for delivering a surprising third-act twist. The talk is that Mother should be remade for the U.S. market with a name actress in her late ’40s or early ’50s in the title role.

It’s 9:46 am and I’m looking at the following for today: (a) the Kinatay press conference at 11 am; (b) 45 minutes worth of Alejandro Amenabar‘s Agora, which begins showing at 11:30 am in the Grand Lumiere; (c) a sitdown interview/lunch with Ang Lee and the Taking Woodstock gang from 1:30 to 2:45 pm; (d) a possible visit to the 3 pm Agora press conference; (e) three or four hours of writing time; and (f) a 7:30 screening of Lars von Trier‘s Antichrist, which I’m very much looking forward to.