Let’s review the Judd Apatow comedies yet to come out and arrogantly spitball which ones seem more likely to downgrade or upgrade the brand. We know Drillbit Taylor has gotten slammed and put the brand in a position in which it needs (in the view of guys like me ) to be restored. When will that happen, and what kind of bumps in the road lie ahead? Five Apatow-produced or co-written comedies will open over the next 15 months, and an Apatow-directed and co-written comedy will open in late ’09. 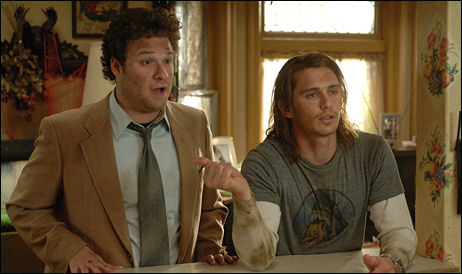 Obviously we’re speaking of films Aptatow has produced, co-written or directed (or plans to direct) that haven’t come out yet. All of them delivering standard Apatow attitude humor, always with the clever stoner-slacker guy, or the space-case or the dork-dweeb or the absurdist cavemen with the one-liners, and always with these guys not only scoring with great-looking women — girls who wouldn’t spit on these guys in real life — but getting into good relationships with them and so on.
Next up, of course, is Forgetting Sarah Marshall (Universal, 4.18), which I mostly hated but which easy-lay under-40 types are apparently going for. Suspicion: Definitely not an upgrade but maybe, in the view of most, not a downgrade either. Call it a maintainer, a non-boat-rocker. I would have liked this film a bit more if it had been called Eating Sarah Marshall. I just like that title. Not the lewdness, but the nerviness.
On June 6th (i.e., 48 days later ) comes You Don’t Mess With The Zohan, an Adam Sandler comedy about a Mossad agent who “fakes his death so he can re-emerge in New York City as a hair stylist.” Apatow only cowrote with Sandler, meaning this is basically a Sandler-brand comedy. Apatow, however, did pitch in creatively and if it turns out to be pretty good and/or popular (the word is positive), it will make Judd look like he’s definitely still got it. Prediction: Faint upgrade. (Dennis Dugan, a longtime Sandler stooge, is the director.)
On July 25th Step Brothers (Sony/Columbia), an Apatow-produced comedy with Will Ferrell and John C. Reilly, will open nationwide. Written by Ferrrell and Adam McKay, it’s about “two spoiled guys become competitive stepbrothers after their single parents get hitched.” I know zip but a voice is telling me it’s an underwhelmer. I’m mostly just sick of Ferrell these days, and I’m figuring others are feeling this way also. Prediction: possible downgrade, possible maintainer. My sixth sense says “cuidado!.”
Two weeks later, on August 8th, comes Pineapple Express (Sony), which Apatow produced and wrote the story for. Everyone seems to agree (including one guy I know who’s actually seen it) that this Seth Rogen-James Franco comedy, directed by David Gordon Green, is going to be a hit. Prediction: Upgrade.
Oddly, curiously, there will no fresh Apatow product all through the ’08 fall-holiday season and through the winter and spring of ’09.
On June 5th Harold Ramis‘s Year One, a caveman comedy (10,000 B.C. with laughs) that Apatow produced but didn’t co-write, will open. It costars Jack Black and Michael Cera. The writers are Ramis, Lee Eisenberg and Gene Stupnitsky. Any time you have lots of special effects, lots of physical comedy and actors wearing animal skins and sandals, the hah-hah factor goes down. Special effects are humor killers. Any scenes with Black and Cera running from saber-tooth tigers and mastodons won’t be funny. Any scenes with Black and Cera clubbing women and dragging them to their cave by their hair won’t be funny. Any humor involving Ancient History or Biblical material won’t be funny. A stunt comedy. Dicey. Prediction (subject to change): Downgrade.
Finally there’s an untitled Aptaow/Adam Sandler project that will shoot later this year and come out sometime in ’09. These two working together obviously sounds promising. Prediction: Upgrade.
Out of the six forthcoming Apatows, I see two and a half upgrades (Pineapple, Apatow/Sandler Untitled and You Don’t Mess with the Zohan), two downgrades (Step Brothers, Year One) and one maintainer (Forgetting Sarah Marshall). Obviously you need to add an extra downgrade if you include Drillbit Taylor.
Capsule summary: the Apatow brand will not be enhanced between now and June, get a little bump from the Zohan, take a possible hit from Step Brothers, rise again big-time with Pineapple and stay there for eight months. It may take some animal-hide damage in the summer of ’09, but it will probably bounce back when the Apatow/Sandler comedy bursts on the scene (unless it sucks).
Am I missing something?