There have been a couple of recent bellwether showings of Judd Apatow ‘s Funny People (Universal, 7.31) in Los Angeles — a friends-of-Apatow screening plus a research screening that happened (I’m told) about eight days ago. And the word is better than pretty good, “amazing,” “James L. Brooksian,” etc. The leads, of course, are Adam Sandler and Seth Rogen, with Leslie Mann, Eric Bana, Jonah Hill and Jason Schwartzman in supporting. 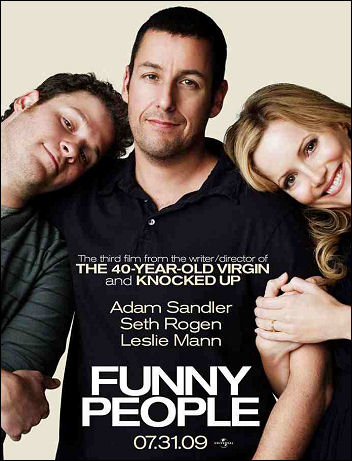 Possibly an award-level thing, a director friend said this morning, although he was just passing along the chatter. It’s more in the realm of Sandler for Best Actor and Apatow’s script for Best Original Screenplay, he speculated, than a Best Picture shot…but you never know.

So I called a non-vested guy who’s seen it, and here’s what he said: “Really funny, a really sweet movie, a lot of veracity…really a brilliant film. Everybody’s game goes up a lot. It’s a James L. Brooks-level thing and a great role for Adam. It’s a perfect blend of everything Sandler has done in a serious vein. The film could be a bit of a marketing problem because it’s about show business but it’s so real.. It’s about a famous guy, a comedian, having to deal with the fact hat he has no life and nobody to turn to. But he gets better [through a relationship with a younger comic]…it’s basically a love letter to having a family.”

Could be a “marketing problem” because it’s about show business? Average Joes are resolved in their opposition to a movie set in the entertainment community? What kind of stupid-ass attitude is that?

A guy in the Universal loop says he “would argue a bit on the ‘marketing problem’ as the trailer [has] consistently scored tremendously well, no matter what kind of movie it’s shown with. Audiences are really responding very very well so far and the trailer does not dodge the central conceit of the sickness/rebirth.”

I’ve had the script for a long while and have been too lazy to read it. The IMDB synopsis says it’s about “George (Sandler), a very successful stand-up comedian who learns that he has an untreatable blood disorder and is given less than a year to live. Ira (Rogen) is a struggling up-and-coming stand up comedian who works at a deli and has yet to figure out his onstage persona. One night they perform at the same club and George takes notice of Ira, and hires him to be his semi-personal assistant as well as his friend.”