You can love, like, worship, dislike, piss on, wrestle with, admire or kvetch about Judd Apatow‘s Funny People (Universal, 7.31) but you have to give it this — it’s a major Apatow brand-changer. It darkens, challenges, deepens, reboots and broadens the definition of those cereal-box ingredients that people think of when they refer to Apatow-brand entertainment. It’s not a “great” film but for me it’s a stunningly brave (by which I mean exceptionally candid and self-revealing) one. And funny as shit. 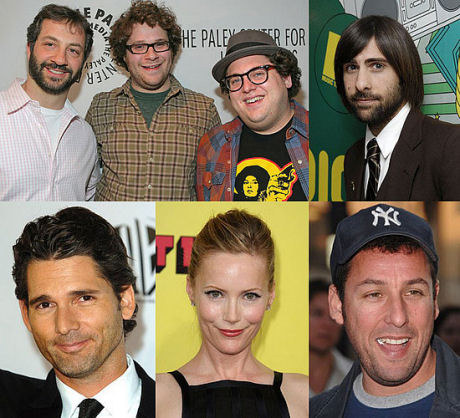 It really is the best Apatow movie so far. Not the warmest of friendliest or feel-goodiest, but unquestionably the frankest and ballsiest. A genuinely funny, corrosive, uncliched, agreeably smartass thing. Not perfect but close enough to what I wanted that I came out delighted. I believed each and every line and attitude and plot turn. I had a few minor beefs but no major ones.

This is very close to the Apatow flick I’ve been waiting for, and which frankly I had begun to think might never come from his workshop. Hats off, smart salute, balls of steel, etc. This is a significant leap forward.

A present-day Hollywood story about a selfish and not particularly lovable comedian (Adam Sandler) going through surges and regressions due to the emergence of a fatal disease, Funny People is an intimate and revealing and self-critical film about what selfish shits comedians can be. And what it is and what it takes to be a mensch. For the first time Seth Rogen plays a fairly interesting and layered character with seriously believable chops. Congrats also to the great Jonah Hill, Jason Schwartzman, Eric Bana, Leslie Mann, etc. — everyone’s game surges with this thing.

Funny People is much more of a Billy Wilder film than a James L. Brooks or Cameron Crowe one because it’s a film about values and decency and — you have to at least respect this aspect — a frank look at the selfish, uber-competitive tendencies of many comedian types. 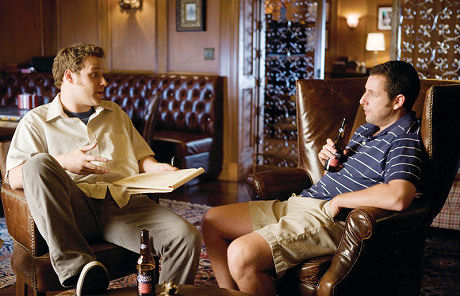 “Take no notice of anyone who says Funny People is too long or doesn’t work,” I wrote/twittered this morning. “What they really mean is ‘where’s my Big Mac?'” They want, in other words, their Apatow meatloaf-and-mashed-potatoes fix — a yawhaw stoner/slacker comedy in the vein of The 40 Year-Old Virgin and, to a slightly more realistic extent, Knocked Up.

Funny People is consistently funny but in a low-key, casual-fuckall “if you get it fine and if you don’t so what?” sort of way. It’s unquestionably Apatow’s finest film. He’ll never go back to the sandbox of The 40 Year-old Virgin after this. At times last night I was telling myself, “Jesus, this is amazing.” Everyone’s game really does go up a lot in this thing. I know, I know — I’m repeating myself.

You know what’s great in this thing? A cameo scene with Eminem. It’s worth it for this bit alone.

Funny People poses a a bit of a marketing problem because it’s about show business types but also because it’s very real as occasionally cold, fuck-off-dickhead, slapdown, take-it-or-leave-it. It’s about a famous and wealthy guy having to deal with the fact hat he has no life and nobody to turn to. It winds up being a kind of love letter to having a family. Ballsy, mean-funny, honest, straight from within.

Most fans of Virgin and Knocked Up, I suspect, are going to have qualms, but that’s what happens when you deepen and darken and expand the brand — people go “hey, this doesn’t taste like the others! Gimme my comfort food!” Most people just want to kick back and watch fucking Seinfeld. Good God! Is there any once-legendary TV series that feels lamer by today’s standards? The fans used to brag about it being “a show about nothing.” Not any more. The let’s-lie-around- and-jerk-ourselves-off easy money days of the ’90s are over.

A voice is telling me, in any event, that the Seinfeld people — a good portion of them — are probably going to complain or feel uneasy about Funny People, and when they do they’ll only be taking their own game down. 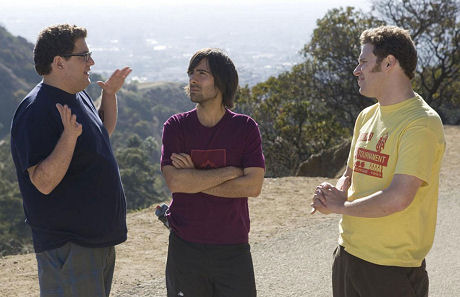