Here’s a fairly good review of Apocalypse Now: The Complete Triple Dip, the DVD containing both the original theatrical and the Redux versions of Francis Coppola‘s 1979 classic. I’m kidding about the DVD’s subtitle — it’s actually called The Complete Dossier. 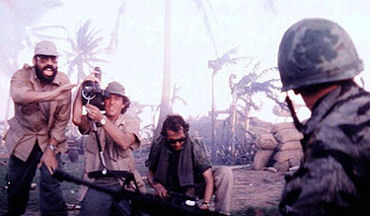 The most exciting extra for a lot of people will be a full 17-minute reading of T.S. Eliot‘s “The Hollow Men” by Marlon Brando. There are also 13 deleted scenes, including one called “Monkey Sampan” One, deemed “a notoriously hard-to-find relic from the film√É¬¢√¢‚Äö¬¨√¢‚Äû¬¢s original construction” plus 12 additional sequences are not available in either the original or Redux versions
Apocalypse Now was shot in 70mm and was initially shown in the correct widescreen 70mm aspect ratio of 2.21 to 1. This new DVD has Apocalypse trimmed down to 2.35 to 1, which sounds like they’ve chopped off the tops and bottoms slightly. I saw it in 70mm at the Ziegeld 27 years ago and I know they showed it at 2.21 to 1 during that engagement and they wouldn’t have done this if it hadn’t been cool with Francis and the powers-that-be, so anyone who says a 2.35 to 1 presentation is somehow better or more complete is wrong. I’m always disagreeing with people who think it’s better to show a film with the tops and bottoms chopped off. Give it air, I always say. Give the actors a little headroom.
To be a really complete Apocalypse dossier, of course, George Hickenlooper and Fax Bahr‘s Heart of Darkness — a brilliant documentary about the tortured making of the film — should have been included, and of course it hasn’t been