There are those who continue to insist that Soggy Bottom, the alleged title of Paul Thomas Anderson‘s Hollywood-in-the-’70s drama, is just a placeholder. The real title, which may or may not have more of a poetic ring than Soggy Bottom, will be announced down the road, they say.

But if it is just a place-holder, why did Anderson register the title with the WGA on 7.16.21? [Thanks to World of Reel‘s Jordan Ruimy for forwarding the screen capture.] Was it because PTA hadn’t yet decided on the real title so what the hell?

What could Soggy Bottom even mean? Some kind of half-assed metaphor for the culture of the entertainment industry?

I may as well be honest and confess right now that I really, really don’t like the idea of watching Benny Safdie playing an L.A. politician based on closeted L.A. City Council member Joel Wachs. Of all the people Anderson could’ve hired to play this character, he gets a fellow director film bruh? Why? I’m generally anti-Safdie since watching the exhausting, anxiety-ridden Uncut Gems, and I didn’t care at all for Safdie’s Lennie Small-like performance in Good Time (’17). 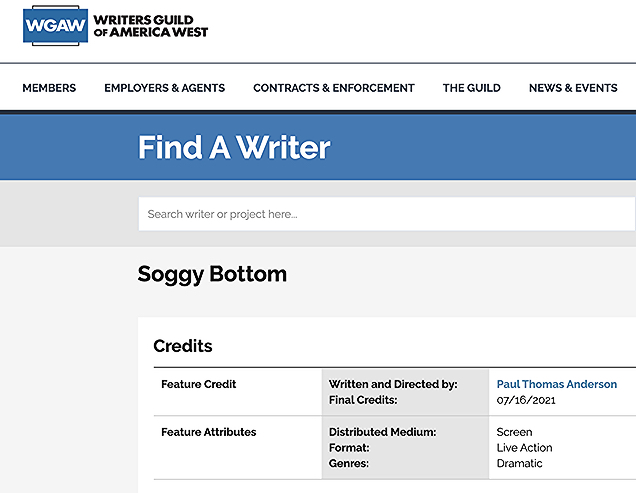 August 23, 2021by Jeffrey Wells19 Comments
« Previous post
It Suddenly Occurs to Toronto…
Next post »
The Hand of the Dog