Are You Speakin’ To Me?

As part of a week-long tribute to the recently departed Michael Chapman, Trailers From Hell is highlighting three brief Chapman commentaries, including Rod Lurie‘s 2013 riff on Martin Scorsese‘s Taxi Driver (’76).

Chapman’s impressionistic lensing of this moody portrait of increasingly delusional loneliness, and how a certain Manhattan cab driver is gradually engulfed by a vaguely hellish and spooky city with all kinds of needles and provocations…we all know the drill. But I have two quibbles with Lurie’s patter.

One, Taxi Driver is not “as depressing as a dying nun.” It’s hauntingly alive and pulsing and tingling with dread. “Depressing” is when a film depicts a relatively flat and oppressively defined realm of regimentation and submission from which there’s no escape.** “Depressing” is when a stuck, not-very-smart character is without nerve or options. Robert De Niro‘s Travis Bickle, one senses early on, is definitely a guy with options. They just happen to be of a powder-keg variety.

Two, Lurie suggests that Bickle’s “are you talkin’ to me?” is a steal from Shane — a line that Alan Ladd said to Ben Johnson inside Grafton’s Saloon and General Store. The line was actually “are you speakin’ to me?“, a slightly more refined form of inquiry. Plus it was ad-libbed by De Niro, and I seriously doubt if George Stevens’ 1953 western…aahh, who knows?

The difference between “talking” and “speaking” was pointed out in a scene from David Mamet‘s Glengarry Glen Ross: 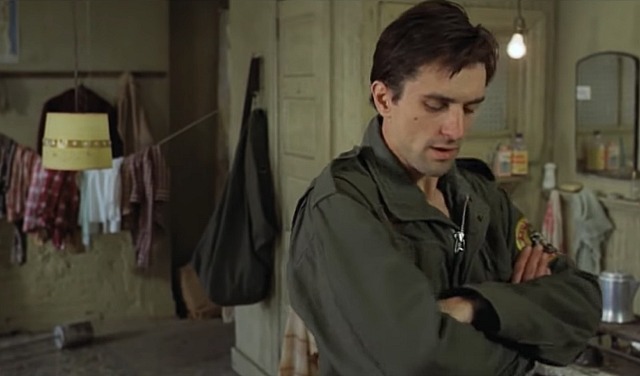 September 29, 2020by Jeffrey Wells25 Comments
« Previous post
Pete Was Way In Front
Next post »
Redmayne Steps In it