New York‘s “Vulture” columnist Ben Mathis-Lilley hit it right on the head in his assessment of the Ari-Lloyd thread in last night’s Entourage episode. He calls it “a subplot that wavered with surprising skill between comedy and tragedy,” and that it “points to the odd fact that the ostentatiously hetero Entourage writers do a much better job writing monologues for a hyperactive gay Asian than they do writing shit-talking bro-down exchanges between the four dudes. 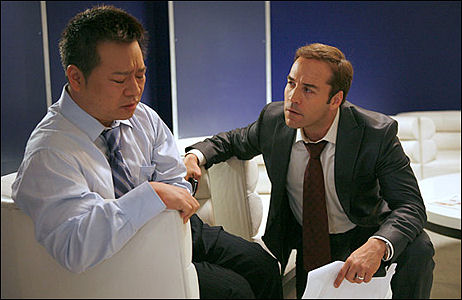 “It also led to the scene in which Ari tracks down Lloyd’s ex and reveals that Lloyd was actually at work the previous Friday, not philandering like the boyfriend thought. Typically clean Entourage wrap-up, it seemed, except it turned out that Ari was just covering — Lloyd was cheating! It was an unexpected moment of depth involving a peripheral character, followed up by an even more unexpectedly heartfelt moment in which Lloyd explained that he strayed because he’s so plagued by self-doubt that he didn’t know what to do when someone he thought was out of his league showed an interest in him.
“Great stuff!,” Mathis-Lilley concludes. “Should Entourage go all gay, all the time?” Uhm, well, no…but Lloyd is a first-rate character, and it’s always pleasurable when a genuinely ironic turn occurs (i.e., an amusing but essentially deranged psycho agent brings a couple back together and brings happiness into their world for totally selfish reasons). Real-life stores are often made up of morally tangled situations, but TV and screenwriters rarely use them.