Art of the Hustle

I’ve seen Jonathan Parker‘s (Untitled), which shows tomorrow afternoon (1.9) and early Saturday evening (1.10) at the Palm Springs Int’l Film Festival. It’s an underplayed, bone-dry New York relationship comedy with a point to make about the art scene there. Parker and cowriter Catherine DiNapoli are basically saying it’s a kind of cesspool of pretension and phoniness, and that the people who regularly buy and/or support much of what passes for modern art are either deluded or phonies or both, or are simply being flim-flammed. 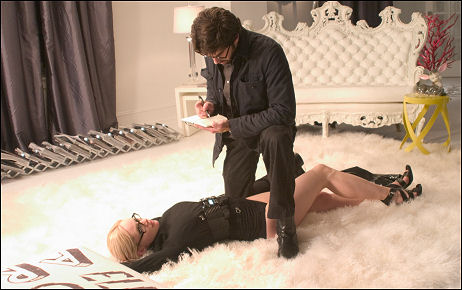 So it’s anything but a stupid slapstick comedy, and because of that I was more or less favorably disposed. It’s vaguely Woody Allen-esque but without the schtick. I didn’t laugh out loud all that much; I mostly smirked and occasionally chortled, but there’s nothing wrong with that. And I enjoyed staring at Marley Shelton (Grindhouse), whom I hadn’t paid very much attention to before. She believably plays a sharp Chelsea art-gallery dealer, which is to say I bought her projections of cunning, shrewdness and intelligence, however natural or manufactured. Call this a modest breakthrough performance.

The plot is about how Shelton comes to dump a boyfriend (Eion Bailey) whose mediocre paintings are very popular with her corporate clients, and instead begins to see his doleful and bearded brother (Adam Goldberg), a very pretentious anti-musical pianist whose performances are entirely about defying conventional taste, to put it very mildly. Goldberg’s performance is fine — subdued comedy is his forte — but his beard and hair are so bushy you can barely see his face. I know, I know…an anti-musical pianist who kicks buckets and whatnot is precisely the sort of guy who would have too-much head hair.

I don’t know what else to say except that (Untitled) could have used as few more jokes. And a better title. Svetlana Cvetko‘s widescreen cinematography is well-framed and, I’m sure, professionally lit and captured. (The print I happened to see a while back was projected with the wrong digital calibration and therefore looked like a murky VHS.) But it’s an intelligent sit, this film. I felt pleased and settled when the lights came up. That’s not a bad thing. Okay, a good thing.

Vinnie Jones plays a wackjob sculptor with his usual verve turned down a couple of notches.