The Rotten Tomatoes consensus so far is that Arthur (Warner Bros., 4.8) blows the big one. The only guy who’s given it a semi-pass is MSN’s Glenn Kenny. (Can Kenny be trusted when it comes to romantic comedy? The watchword is “caveat emptor.”) My personal view is that it’s not awful, but it sure is unnecessary. 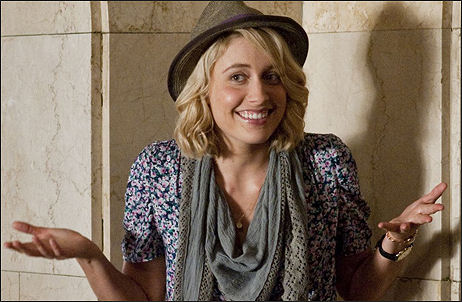 The vibe in the Arclight theatre during last night’s screening felt flat, like a lot of underwhelmed people waiting for a high-school study hall to end. The 1981 original should have been left alone. That was then and this is now. People look at profligate indulgence and giggling, stumbling-around alcoholism differently. For whatever reason Dudley Moore‘s bubbly millionaire slipped through and felt right. But Russell Brand‘s never quite finds the groove.

Brand has done himself no favors, let me tell you. He was looking pretty good and jazzed after the success of Get Him To The Greek, but now he’s bombed and for one reason only: he’s not funny. Plus there’s something generally repulsive (as in “not at all attractive” and “fuck off”) in our post-crash-of-’08 environment in watching a gangly alcoholic infant with a high-pitched “do I sound like Dudley Moore?” voice blowing scads of money and then shrugging it off. I’ll shrug you off, ayehole!

But Greta Gerwig, who plays a version of Liza Minnelli role in the ’81 film, has an inner light in most of her scenes. She’s partly on the movie’s wavelength, partly on Brand’s during their scenes together, and partly on her own. You can sense her basic kindness, openness — a charitable, turn-the-other-cheek disposition. I’ve met and dinner-ed with Gerwig and this is her, pretty much — she’s playing a role in a Warner Bros. film, but also self-portraiture.

And for the first time in her professional life, Gerwig has studio makeup people and hair people and key-lighting people making her look extra-glowing and glamorous with perfect hair, and it works. She’s golden, and this, coupled with her spiritual light, is what makes Gerwig the only element that half-works in this film.

And to think that the Warner Bros. marketers actually kept Gerwig off the one-sheet when the first one came out. These people really do have Death Star attitudes and souls. They seem to only understand corporate-bullshit-franchise movies — they’re lost in the woods when it comes to movies about real people, or trying to convey that a film has elements that might appeal to same.

Jennifer Garner is arch and brittle in the second-lead female role — an ice-queen who wants to marry Arthur for his holdings. She hasn’t done herself any favors either. Helen Mirren is okay — inoffensive — as Arthur’s 60ish female nanny, and Nick Nolte has a moment or two as Garner’s billionaire dad. Although I still don’t understand a scene in which he forces Arthur to test a special electric table-saw that stops instantly when it senses moisture — testing it by placing his tongue on the whirring blade. What the…?