Will someone with a PDF of the shooting script for the new Arthur (authored by Peter Baynham and Jared Stern, based on characters by Steve Gordon) get in touch so I can straighten out a confusing issue? I’d like to know if the about-to-open remake (Warner Bros., 4.8) has changed the original story so that Liza Minnelli‘s Linda Marolla character, who wound up with Dudley Moore‘s Arthur at the end of the 1981 original, is now, in the person of Greta Gerwig, a secondary character. Or not. 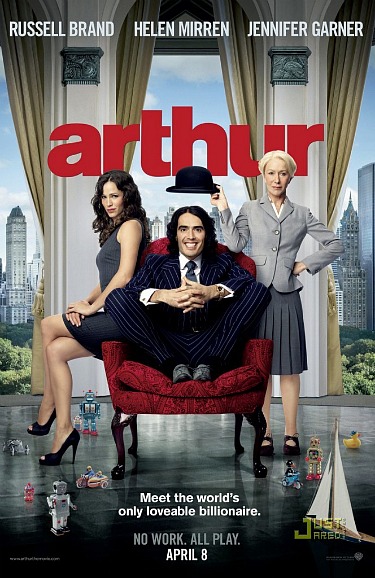 Obviously the new Arthur poster more or less declares that Jennifer Garner is playing Russell Brand‘s primary love interest even though she’s playing “Susan Johnson,” the somewhat bitchy character played by Jill Eikenberry in the 1981 original — whom Moore wound up shafting. I realize, of course, that Gerwig might “be” Liza Minnelli, and that the poster image is simply a marketing decision because the Eloi (i.e., the ticket-buyers who would rather face firing squads than watch Greenberg) doesn’t know who Gerwig is.

Here’s how I put it to a couple of Warner Bros. publicity pals a few minutes ago:

“I’m really confused by the Arthur poster, guys — can you please help?

“Greta Gerwig is playing Liza Minnelli’s character in Arthur (called ‘Linda Marolla’ in the ’81 film, now called either Linda or Naomi in the new version?), and yet the new poster has a shot of Russell Brand, Helen Mirren and Jennifer Garner (who’s playing Jill Eikenberry’s character in the ’81 film, whom Dudley Moore’s Arthur ultimately dumped in the original).

“This obviously indicates to everyone that Garner is playing the principal romantic interest. So have the filmmakers totally switched the story around or what? Or are they just putting Garner on the poster because she’s a well-known star and Gerwig isn’t as well known?.”

4:15 pm update: A Warner Bros. spokesperson has gotten in touch and said the following:

(1) This is a teaser poster. Another piece of Arthur art will be seen down the road. (Hint: Gerwig may be featured on subsequent art?)

(2) There is a romantic relationship between Greta Gerwig and Russell Brand’s character in the film. The spokesperson indicated the ultimate outcome of this relationship, but then asked me not to repeat what she said. But it’s not tragic.

(3) Gerwig’s character is called Naomi and not Linda Marolla (as Minnelli was called in the ’81 film).

(4) The new Arthur is a reinvention and not a straightforward remake.

(5) One example of this, she said, is that Hobson, the character played by John Gielgud in 1981, is now played by Helen Mirren. But I think most of us knew that a long time ago.